A large quake sequence totalling hundreds of tremors is ongoing at Askja volcano since 11/9/2019. The largest quake so far has been a magnitude 3.2 quake. The swarm appears to be on the NE margin of the main caldera in an area that has in the past issued lava flows through fissures. There is no clear answer from the Iceland Meteorological Office or other sources as to whether or not this is magmatic or tectonic in nature.

Blogger Jon Frimann seems to indicate the swarm is tectonic, while VolcanoDiscovery.com seems to suggest this is related to magma dike intrusion. Again, no official source has confirmed any of this. 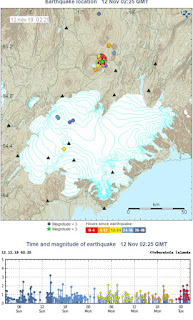 Askja caldera has seen dramatically increased seismicity since the eruption of Bardarbunga (Holuhraun fissure) commenced and ended and has had minor seismicity daily since. The last eruption of Askja was a VEI 2 occurring in Oct 1961, however it has proven capable of much, much larger eruptions, with a VEI 5 on New Years of 1875. Any current eruptive cycle would likely be a VEI 2 or 3, depending on the interactions with water/ice and magma supply.

Quake swarms and dike intrusions often amount to no activity on the surface of a volcano, so until the Iceland Met Office chimes in with an official prognosis, anything should be considered speculative at this point, however this is indeed a dramatic rise in activity even from the rise in activity post-Bardarbunga. The Bardarbunga dike intrusion has been theorized by some to have affected or influenced the Askja system, so it's anyone's guess at this point.

An eruption of Askja will not likely threaten any population in Iceland, but as seen with Grimsvotn and Eyjafjallajökull, it could conceivably pose a threat to air travel around Europe.

The swarm is still ongoing at this time. Volcano Discovery has updated their news feed to include the following report (although take it with a grain of salt as there is still no official word out of Iceland regarding the quake sequence):

"An swarm of earthquakes is occurring near the Askja caldera, in an area approx. 10 km ENE from the rim and at depths around 5 km. More than 550 small quakes have been recorded during the past 5 days, but so far, most quakes have been tiny. The largest events were two shocks with magnitudes 3.2 and 3.4, felt by local residents. The swarm is likely caused by an intrusion of magma into an underground fissure (dike), which could but not necessarily must (and most often does not) lead to an eruption."

Today's largest tremors have been around the 2.5 range, with most quakes much smaller.

*****UPDATE 2 - 11/12/2019*****
The Iceland Meteorological Office has issued the following statement, which more closely suggests that this is tectonic - not volcanic - in nature:

An earthquake swarm started the 7th of November just east of Askja volcano and is still ongoing. Around 700 earthquakes have been recorded in the area since the swarm started. The largest earthquake was about M3.4 and occurred on the 9th of November. In addition to that earthquake, one earthquake > M3.0 has been detected during the swarm until now. No volcanic tremor has been detected in the area. This is more like brittle type tectonic earthquakes related to continental drift. Earthquake swarms occur regularly around Herðubreið and Askja. The IMO is monitoring the activity 24/7.