Chile's Copahue Volcano, which also shares its summit with neighboring Argentina, has been raised to alert level "RED" by Southern Andes Volcanological Observatory (OVDAS) after strong eruptive activity today. The volcano became restless a couple of weeks ago when tremor and minor steam, gas, and ash emissions were observed. A Facebook statement from the Smithsonian GVP stated:

"...Red Alert status was maintained and increased seismicity was reported in yesterday's report by the Southern Andes Volcanological Observatory (OVDAS). Approx 130 EQ were recorded per hour (mostly hybrid but some spasmodic tremor); these were shallow events. Last year the seismic network was expanded to include a new station (the 3rd in the network) located across Argentina's border, expanding early warning capabilities. (http://www.perfil.com/ediciones/ciencia/-201212-740-0057.html) Dated 28 May 2013, this photo was available from Argentina's publication "La Voz" (http://www.lavoz.com.ar/noticias/sucesos/exodo-pobladores-ante-posible-erupcion-volcan-copahue#). — at Caviahue-Copahue."

Copahue volcano is characterized by the GVP here:

"Volcán Copahue is an elongated composite cone constructed along the Chile-Argentina border within the 6.5 x 8.5 km wide Trapa-Trapa caldera that formed between 0.6 and 0.4 million years ago near the NW margin of the 20 x 15 km Pliocene Caviahue (Del Agrio) caldera. The eastern summit crater, part of a 2-km-long, ENE-WSW line of nine craters, contains a briny, acidic 300-m-wide crater lake (also referred to as El Agrio or Del Agrio) and displays intense fumarolic activity. Acidic hot springs occur below the eastern outlet of the crater lake, contributing to the acidity of the Río Agrio, and another geothermal zone is located within Caviahue caldera about 7 km NE of the summit. Infrequent mild-to-moderate explosive eruptions have been recorded at Copahue since the 18th century. Twentieth-century eruptions from the crater lake have ejected pyroclastic rocks and chilled liquid sulfur fragments." 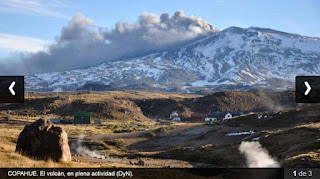 Image posted by Smithsonian GVP showing ash eruption from Copahue on May 28th.
The last eruption of Copahue volcano was in the year 2000, so it has not erupted for about 13 years or so.

Chile lies along the so-called "Ring of Fire" and is prone to frequent eruptive activity from its many active volcanoes.

Pavlof volcano on the Aleutian Peninsula of Alaska has entered an eruptive phase after increased seismicity and thermal anomalies detected in satellite data. A Facebook post from USGS issued the following statement today (although a bit late).

"On May 13, 2013, USGS-AVO reported that seismic activity at Pavlof increased that morning, along with the presence of an intense thermal anomaly at its summit. The Alert Level is "Watch;" Aviation Color Code Orange.

Similar patterns of seismicity and elevated surface temperatures have previously signaled the onset of eruptive activity at Pavlof. Although not yet visually confirmed, a low-level eruption of lava has likely begun from a summit vent. No ash clouds have been detected."

An overflight by a pilot has confirmed the presence of a summit spatter cone, and advancing lava flow. (seen below in a picture from AVO, Photograph by Brandon Wilson). The last eruption from Pavlof was in 2007. 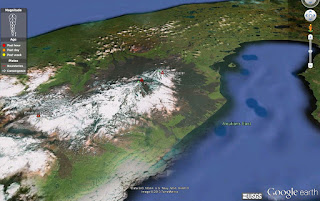 The Smithsonian GVP characterizes the volcano of being capable of Strombolian eruptions, and explosive eruptions. This eruption currently appears to be mostly effusive, or possibly Strombolian, although it's a bit unlikely that we'll get to see any great nighttime shots.

Pavlof joins Cleveland Volcano in the 'currently erupting' club of Alaskan stratovolcanoes, as earlier this month, Cleveland let out a nice explosion that was strong enough for air traffic to be diverted around the volcano (aside from this minor annoyance, that's pretty typical of Cleveland).

There are no major human populations immediately near Pavlof, although the town of Aleutian East Burrough with a population of around 2700+ lies about 12 miles SSW of the volcano. Damage to this area is unlikely, although if the volcano does have an ash eruption, ash fall could affect the area.

"Over the past three days, the eruptive activity at Pavlof have greatly declined. Seismic tremor and small discrete explosions are no longer detected in seismic and pressure sensor data. Satellite observations show no evidence of elevated surface temperatures, volcanic gas or ash emissions. There have been no visual observations from pilots or web cameras of any eruptive activity. Consequently, the Aviation Color Code was reduced to Yellow and the Volcano Alert Level to Advisory today (28 May) at 12:50 AKDT (20:50 UTC)."

It is still possible for the volcano to continue its eruption. Past eruptions have had periods of intense explosion, followed by lulls in activity.

Activity has resumed at Pavlof. The following statement from AVO details the continuing eruption:

"Ash emissions have resumed at Pavlof starting at approximately 11:00 AKDT (19:00 UTC) this morning as seen in satellite data and observed by pilots. Weak seismicity beginning at 10:57 AKDT accompanied the emissions and is ongoing."

"Ash emissions from Pavlof continue. Seismic tremor and explosion signals accompany the activity. Persistent elevated surface temperatures consistent with lava effusion were observed over the past day in satellite images. Satellite images from the last day also show an ash plume extending 12 miles (20 km) southeast of the volcano. This direction is consistent with low-level (less than 20,000 ft asl) winds."

So it appears that the volcano may erupt in 'spurts' and will likely continue erupting for some time. If anything changes I'll post about it!