Bardarbunga Volcano has just now initiated a series of larger-than-normal background activity quakes which could indicate a new eruption is not far away. In Bardarbunga's caldera, SW from the Holuhraun eruption of 2014-2015, a quake swarm with the maximum magnitude of 4.0, followed by several smaller quakes, and than several 3.0-3.4 quakes hit within the last hour.

What this means is not certain, but it is a part of a pattern of magma movement, that much is clear. Iceland is undergoing a period of active rifting. This rifting enabled Bardarbunga's lava flow at Holuhuraun by making it easy for up-welling magma to find weaknesses in the crust to penetrate and form a dyke intrusion. This eventually gained enough pressure to burst through the crust and create a massive lava field.

The current activity can be seen below: 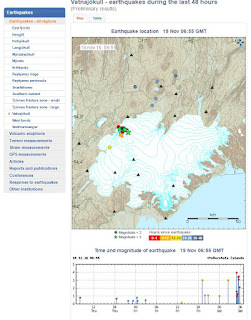 The last time Bardarbunga erupted, it was an effusive, not explosive eruption. It was characterised by a fissure opening in the earth, with lava pouring out at a vigorous rate. This was the largest lava-field creating eruption since the devastating Laki fissure swarm in the 1700's. The eruption lasted for months, and created a vast lava field that reached to the boundaries of the Askja volcanic system, which may could also be getting pressurized by the rifting of Iceland. Seismicity in that area has been at a steady level for quite some time now, and it is anyone's guess when it can erupt.

If, however, Bardarbunga chooses to erupt from it's caldera, this could pose a very large threat to air traffic, local farms and livestock, and create a fair amount of havoc. Eyjafjallajökull's eruption in 2010 was small compared to some of its neighbors like Hekla, Katla, and Baardarbunga. Even the eruption of Grimsvötn (Grimsnes) in 2011 would be much smaller compared to Bardarbunga. It has a much larger caldera, and has proven to have been able to produce very large, up to VEI 6 (Feb. 1477) eruptions.

The main threats from Bardarbunga are large scale plinian eruptions (from the caldera), coupled with lava interacting with ice (which produces pulverized ash, which is quite fine and carries very well on wind currents), and the sheer scale of the magma we're talking about. It's currently, not a small amount. Plainly, it probably won't be much fun for anyone within its reach. And definitely not for aircraft.

At current I do not believe an eruption to be imminent, but as with all Icelandic volcanoes, sometimes they don't give much warning, so it is worth keeping an eye on tonight.