Strongest Hurricane Ever Recorded About To Hit Colima Volcano

South Western Mexico is about to be hit - hard - by the most powerful hurricane ever recorded by NOAA. If that wasn't enough, it seems that Hurricane Patricia, with sustained winds upward of 200mph, is barreling squarely towards Colima volcano, which has been having intermittent explosive eruptions for months now. What will happen when the hurricane hits this stratovolcano? There are a few possibilities.

The volcano, for one, will be just fine. Hurricanes have hit active volcanoes before, in Hawaii, and other islands. This is different. This is the mainland of a large nation, and the volcano isn't a Hawaiian style volcano, it is a stratovolcano that deposits large amounts of tephra and fine ash, which could mean lahars. 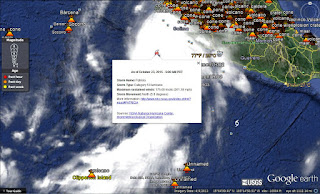 
This is bad news for Mexico. The strength of the hurricane alone is likely to cause a humanitarian disaster, which will be exacerbated by fresh ash laden lahars. The eruptive activity, if it occurs during the volcano, can suspend ash within the hurricane, leading to more problems.

In short, this is a very bad situation for Mexico, and residents would be wise to get as far away from this monster as possible. This will not be pretty, and since we have never seen a hurricane of this intensity in history, we have no idea how bad it will get.
Posted by Matt at 9:09 AM 1 comment: