NEW BRITAIN, PAPUA NEW GUINEA - Ulawun Volcano erupted today with a VEI 5 paroxsysmal eruption, ejecting ash over 50,000 feet into the air today, creating a dire situation for the nearby villages of Ulamona, and Sule. Ashfall is widespread, falling on neighboring islands. 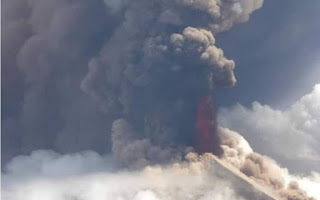 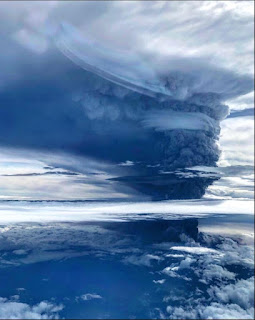 This is the largest eruption of Ulawun since it's 2000 episode. Eruptions of VEI 5 or larger can affect global climate, should enough gas and ash be ejected high into the stratosphere. The 1996 eruption of Mt. Pinatubo caused such an effect, lowering the global temperature average by a couple degrees for around 1 year. These effects are quite temporary however, and do nothing in the long run to counter man-made climate change, contrary to some bad reporting.

A statement I obtained from USGS indicates this was a VEI 4, sub-plinian eruption, with a maximum height of 43,000, not 50,000 ft as previously reported. The eruption is ongoing, and USGS is on site with local government to assist with disaster mitigation.

In Kamchatka, Russia, a volcano long believed to be extinct is 'waking up' according to Ivan Koulakov, a geophysicist from Russia's A.A. Trofimuk Institute of Petroleum Geology and Geophysics. According to a CNN article, the scientist states that "At any moment, an eruption can occur".

The volcano in question is Bolshaya Udina, which is located SE of Tolbachik volcano, and South of Bezymianny volcano. Bezimianny volcano, like Udina, was previously considered to be extinct, prior to a period of eruption from 1955-56. That eruption was quite similar to Mount St. Helens, with a ESE facing collapse followed by lateral blast, and culminating in a dome-building event.

Bolshaya Udina has no recorded holocene eruptions, which is typically the threshold to write off a volcano as 'extinct', however as previously noted - no volcano can truly be considered extinct without monitoring data to back this up.

Indeed, many volcanoes previously considered to be extinct have erupted in historical time, which just goes to show that 'extinct' is never truly such. Chaiten in Chile, and Nabro in Eritrea were both considered to be probably extinct, but erupted with little warning. In the case of Chaiten, it was a very large and destructive eruption. In the case of Nabro, it disrupted flight plans, and issued a long lava flow that forced evacuations of lower-flank villages.

The news about Bolshaya Udina is somewhat fortunate, in that seismicity has been detected due to its closely monitored and more active neighbors. Otherwise this may have gone unnoticed until the volcano erupted.

Udina is not currently erupting, and Ivan Koulakov stated in the CNN article that there is about a 50% chance that this volcano will erupt. There are small villages nearby, which could be impacted, but the area is very sparsely populated.

If Udina does erupt, it is very possible that this would disrupt air traffic due to ash emissions, much like the 2010 eruption of Eyjafjallajökull in Iceland affected much of Europe. But due to its remote location, the impacts would likely be limited to Alaska and the Aleutian islands.

According to the Smithsonian GVP:

"The Udina volcanic massif consists of two conical stratovolcanoes constructed along a WNW-ESE line at the south end of the Kliuchevskaya volcanic group, SE of Tolbachik volcano. The andesitic western volcano, Bolshaya Udina, has a prominent lava dome on its SW flank. The basaltic Malaya Udina rises above a low saddle at the eastern end of the complex; small lava domes also occur on its flanks. This volcano is located within the Volcanoes of Kamchatka, a UNESCO World Heritage property.

The Global Volcanism Program is not aware of any Holocene eruptions from Udina. If this volcano has had large eruptions (VEI >= 4) prior to 10,000 years ago, information might be found on the Udina page in the LaMEVE (Large Magnitude Explosive Volcanic Eruptions) database, a part of the Volcano Global Risk Identification and Analysis Project (VOGRIPA)."
Posted by Matt at 1:34 PM No comments: