Tungnafellsjökull volcano rumbles, Askja volcano quakes, and Herðubreið shakes. What is going on in Iceland? Bárðarbunga's new activity and magma intrusion does indeed seem to be 'squeezing' neighboring volcanoes into a state of higher seismicity. To the West of the Bárðarbunga caldera lies a Pliestocene-Holocene volcano called Tungnafellsjökull, which contains a large caldera, and shield volcano. It has no record of activity during human occupation of Iceland, and it's uncertain whether it has erupted in the last 8,000 years.

Askja volcano, to the North, and neighboring Herðubreið volcano, a Tuya, are also experiencing heightened quake activity. Askja is responsible for one of Iceland's largest eruptions in historical time, which created a caldera (which is now filled by a lake), and fissure eruptions on its flanks. Herðubreið has not erupted in historical time, yet now there appears to be persistent seismic disturbances happening beneath its summit.

So what could be happening? Well, a few things really, but none of them appear to be precursors to imminent eruption... yet...

Tungnafellsjökull is characterized by the Smithsonian GVP:

Earthqauke activity at Tungnafellsjökull has picked up since the dike intrusions, eruptions, and unrest at Bárðarbunga, leading some to believe that it could be 'reactivated' as a result of the crustal pressures. Indeed, magma can remain hot and ready in a volcanic system for a long time, slowly cooling into what's known as 'crystal mush'. In this state, the magma is more viscous and thick, and not typically ready to erupt unless it gets new magma injection... but what happens when a magma chamber gets 'squeezed', as I suspect is happening. Does it build pressure, causing rock fracture, and possible unrest? I see this scenario as most likely... but so far there has not been any opinions generated by Iceland volcanologists (they tend to shy away from 'opinion' and rely on data).

When a large rush of magma from what is probably the main magma plume in Iceland starts moving mountains, you can bet there will be some activity in other parts. Whether or not this generates eruptions in other volcanoes around Bárðarbunga is anyone's guess right now. Typically volcanoes require fresh magma and immense pressure to erupt, but I've never seen an eruption quite like the one in Bárðarbunga, with such rapid ascent of magma dikes and sustained lava flow. Only Kilauea tends to erupt this way, and like Iceland, its volcanic system is attributed to a magma plume or hot spot. The difference is Iceland's hot spot sits on the mid oceanic spreading ridge between the North American and European plates, which spread apart, making eruptions in Iceland potentially more drastic.

In any case, the situation in Iceland is highly dynamic at this point. Good place to keep your eye on for now.
Posted by Matt at 9:35 AM No comments:

This is a continuation of the main blog post about Bárðarbunga.

Bárðarbunga continues it's fissure eruption north of Vatnajökull in the Holuhraun lava field, and signs are indicating that the main caldera of Bárðarbunga is starting to collapse. If I haven't stated this before, that's going to be very bad news for Icelanders if it occurs, however, it's going to be a slow process that can take months. What could happen? Under the main caldera is a magma chamber. That chamber was cut by the magma dike that is feeding the fissure eruption to the north. This allowed magma which was previously stored in the large chamber to escape northward, potentially leaving a void in the chamber.

Without all that magma to support the chamber ceiling with pressure, gravity takes its toll, and the volcanoes caldera walls begin to get sucked into the void. Once it fully collapses, tons of solid rock, ice, and melt water will come into direct contact with the magma at the bottom of the chamber, resulting in a very large explosion. This explosion will have high concentrations of ash, and gas, and could spur a week-long eruption similar in style to the Grimsvötn eruption, but on a larger scale. This absolutely would disrupt air traffic, and will result in massive flooding to the West of the caldera.

Currently, there are no signs the eruption is stopping. IMO reports that they think the amount of lava being erupted by the fissure north of the Bárðarbunga caldera is probably equal or less than the amount of magma entering the dike and chamber, which means the system is STILL very much primed for more action, which at this point will probably occur. No less than seven eruptions (6 of them subglacial, and quite short lived) have been confirmed so far, so the entire region has a potential to spawn a new fissure at any time, and the slow subsidence of the Bárðarbunga caldera is very worrying.

Icelandic scientists will probably not sound this dire in their press releases, because if they sound the alarms and nothing happens, public trust erodes. I am in the 'better safe than sorry' crowd, myself, and would advise people to make plans to evacuate flood plains well in advance of this impending eruption. There are simply no signs right now that this eruption will be coming to an end any time soon, and the longer it goes, the greater the danger will be to those who have not prepared.

Oregon's Mount Hood, one of the famed Cascades volcanoes, has produced a few shallow earthquakes below the summit. What this means is uncertain, but it is probably typical of the volcano. Mt Hood last erupted in 1866 although there are some unconfirmed reports of eruptions in the very early 1900's. A magnitude 2.6 quake occurred below the summit at 3.7km depth, and a much shallower 2.1 one at 0.9km depth. There are currently no reports on these quakes at CVO or USGS.

At this time it is unlikely this means an eruption is occurring, but it could mean anything. 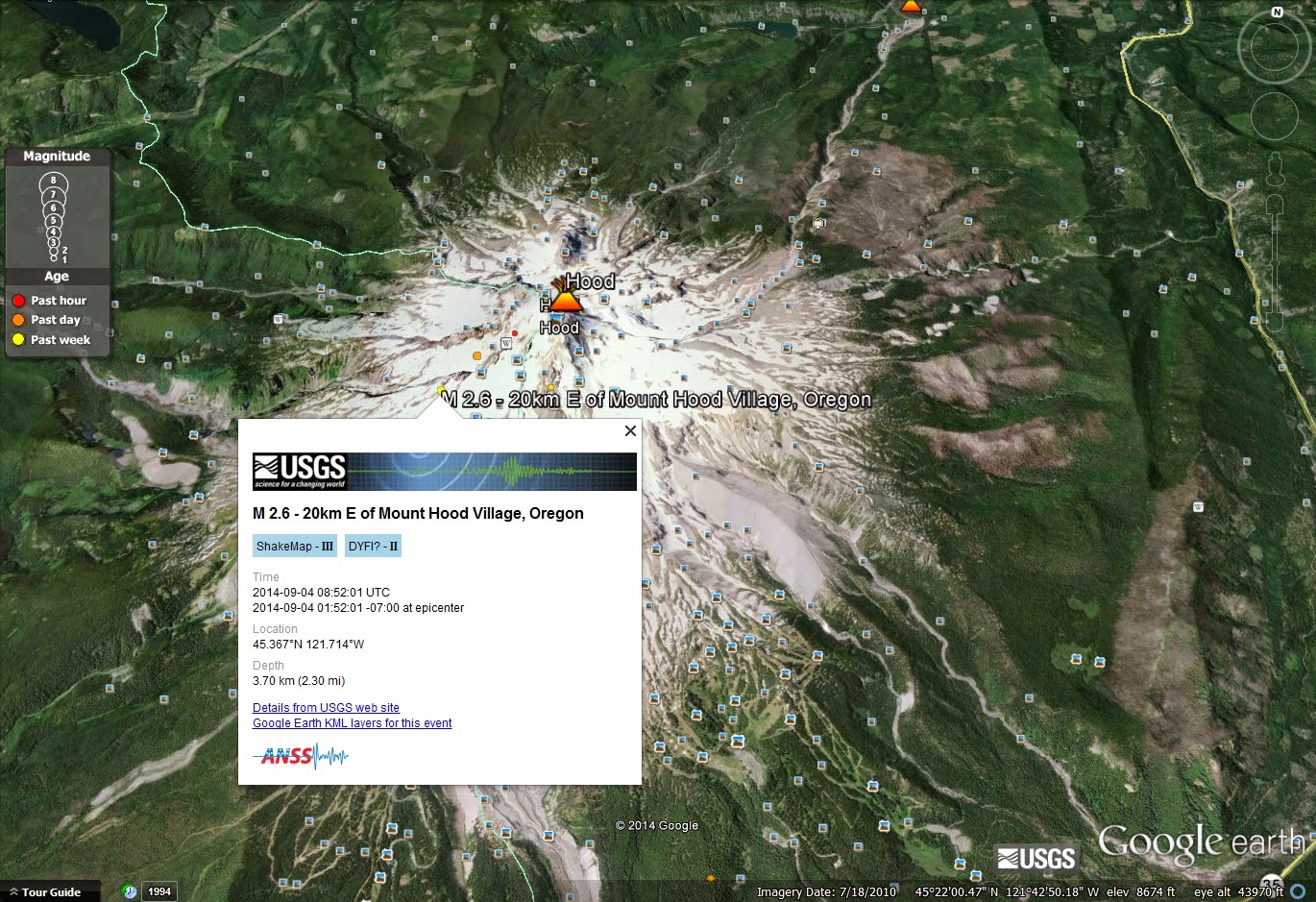 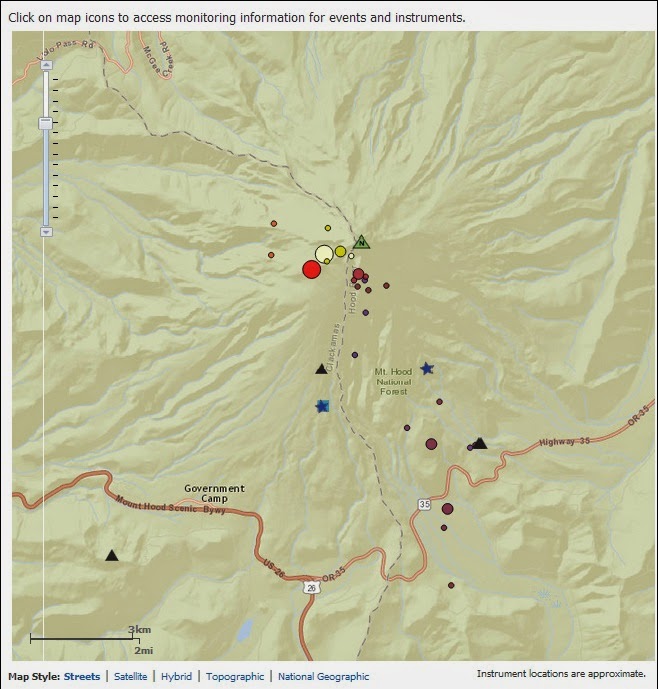 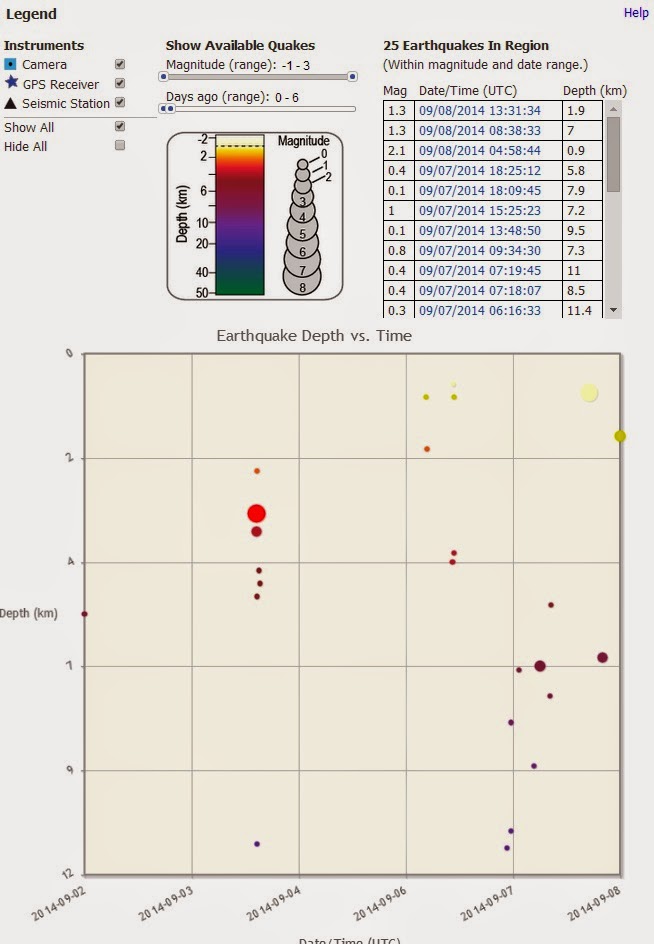 Earthquake swarms are common at Mt Hood, they are not out of the ordinary. If these were volcanic quakes, there would probably be a lot more of them. Hood is a very well monitored volcano, as it has the potential to be very dangerous if it erupts. Like most Cascades range volcanoes, it is covered with glaciers, which can be a problem if lava comes into contact with it, or melts the ice. Lahars, landslides, and ash are all potential hazards if Hood ever erupts.

the last large quake at Hood was a magnitude 4.5 in 2002, which occurred beneath the summit at a depth of around 4.5km. This of course did not result in an eruption.

Right now it's way too soon to tell if this means anything or not, but as with all USA mainland volcanoes, it's best to remain vigilant and keep up to date with their goings-on.