The Tjörnes Fracture Zone has recently reactivated with two separate quake swarms. The first, starting sometime in the last couple of weeks, had been occurring offshore near Grimsey Island. Yesterday, another swarm began taking place near the town of Kopasker, Öxarfjordur, NE Iceland, which has now generated a very long lasting swarm of quakes. Largest quake in this swarm so far had a magnitude of 4.2. 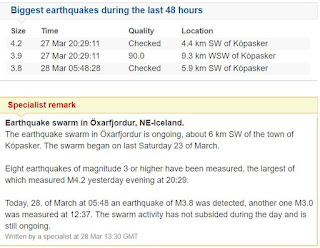 At the time of this writing, nearly 2000 events have now been recorded, with the swarm ongoing. There has been no determination whether these are purely tectonic quakes in nature, although there has also been no mention of volcanic tremor. This is of course, Iceland though, so anything can happen, as it is part of the Atlantic rifting zone. If there was ever anywhere most likely for a new volcano to pop up, it's Iceland. 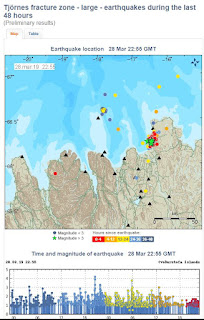 Tectonic swarms like this are not uncommon around the world. In highly volcanic areas though, they are always worth watching. This particular area does not have any Holocene (past 10,000 years) eruptive centers, although some long lava flows from distant centers are present. There is a Pliocene-Pleistocene ridge to the NW of Kopasker, which appears to have formed subglacially.

New volcanoes can form in Iceland where there were previously no obvious volcanoes. The island of Surtsey was formed to the SW of Vestmannaeyjar in 1967 in a similar fracture zone. Vestmannaeyjar itself had a new volcano, Helgafell, form in 1973 with little warning, forcing the evacuation of residents, and prompting an ambitious (and ultimately successful) effort to slow and cool advancing lava with cold ocean water, to protect the harbor.

Until new data analysis emerges however, speculation is just speculation. It is likely that the swarm will eventually end, with no volcanic activity. But you never, never, discount that possibility in a place like Iceland until the facts are in. There is a concern that if the quake continues for a long period of time, it could generate up to a 6.0 magnitude quake.

The earthquake swarm in Öxarfjordur is ongoing, about 6 km SW of the town of Kópasker. The swarm began on last Saturday 23 of March.

Eight earthquakes of magnitude 3 or higher have been measured, the largest of which measured M4.2 on March 27th. Around 2200 earthquakes have been detected since the earthquake swarm started.

Today ( March 29th ) around 350 earthquakes have been detected, the largest one M2.7 at 07:18. During the last 24 hours the intensity has decreased a lot. The swarm is still ongoing. Monitoring of the earthquakes will be followed closely during the week-end.

Kilauea Alert Downgraded To Lowest Since 1983

USGS Hawaiian Volcano Observatory has downgraded Kilauea to the lowest level (Green - background) since the start of the Pu'u'O'o eruption began in 1983. This officially marked the end of the long eruptive period of Kilauea volcano, which ended in August of 2018.

Kilauea remains an active volcano, and will certainly erupt again. It is currently in an inflation phase, where the East Rift Zone's deep magma chamber is recharging at a fairly consistent rate.

USGS HVO scientists estimate that lava will return first to the summit caldera within several years,based on the rate of magma influx to the volcanic system.

Hazards remain in the area as the caldera is still a bit unstable, and the eruptive vents of Pu'u'O'o, and the LERZ vents responsible for the Leilani Estates eruption are still quite hot, and are still releasing heat. The entire zone is still off-limits to residents without escort, and off-limits absolutely to tourists.

Locals in Ngora, Uganda have apparently reported what they claim is 'volcanic activity' at a rock locally known as Moru Otukei rock, which sits just outside of the main village center. Reports like these can in many cases turn out to be false, as fear and local gossip spreads without the presence of geologists and volcanologists to confirm or debunk these claims. 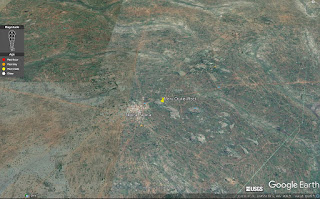 A few years back, a similar claims were made in Burma, India, and Nigeria, which ended up being some sort of effort to get government assistance in a remote part of the country (why they claimed a volcanic eruption was occurring in an area with no history of holocene volcanism is beyond me).

Several videos of locals jumping around on the rock have been posted to Youtube, and Ugandan news sties have started running with the story.

It is highly unlikely that the claims of volcanic activity are accurate. The nearest volcano, Mt. Elgon, is a miocene volcano which, while beautifully preserved, has absolutley no holocene activity associated with it.

Oh, Internet, you're such a strange window into strange places.

According to a local cartoonist, a geophysicist has attributed the cracking rock to a rather simple explanation. Dry weather, and high heat.
Posted by Matt at 6:24 PM No comments:

HILO HAWAII - A magnitude 5.5 earthquake has struck Kilauea about 7.45 miles WSW of Pu'u'o'o crater at a depth of 6.72km. The quake occurred within the same relative area as the large magnitude 6.9 quake which preceded the last large eruption in the LERZ (Lower Eastern rift Zone). Since more active monitoring of Kilauea has diminished since the alert level was lowered to Yellow (watch), daily updates are not provided on the status of Kilauea. 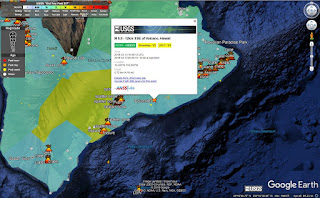 Google Earth with USGS plugin and my proprietary database showing location of new quake at Kilauea.

Kilauea has not had any lava eruptions since the last one ended on August 4, 2018. Deformation data has continued to show inflation down rift of Pu'u'o'o to the LERZ, and multiple D/I (deflation/inflation) events have occurred lately, which is quite typical for the summit area. However after the large quake, it is anyone's guess as to whether the instruments are functional at this moment.

HVO manager Brian Shiro was quoted by the Star Advertiser saying "We see no detectable changes in volcanic activity at the summit or along the rift zones of Kīlauea as a result of this earthquake. Aftershocks are possible and could be felt"

Kilauea had been in a constant state of eruption and lava effusion since 1983, and it is unlikely to become dormant any time soon. Hazards still remain at the LERZ and there is a remote chance that activity could resume in that area. The area is still off limits to residents without escort, and tourists. The HVO re-opened recently, although it is unclear whether the Jagger Museum is safe, and remains closed to the public.