Mauna Loa has been slowly re-loading its vast magma chamber since it's last eruption ended in 1984. In the mid-2000's, inflation increased, stopped, started again, and now continues at a slow pace. I've been covering the goings-on at Mauna Loa and have suspected for a while it was getting ready for its next round, but as of yesterday, HVO has taken notice as well and chose to raise the aviation code (not the alert code) to Yellow (advisory).

Mauna Loa has been experiencing tremor and seismicity associated with small rock-fracture events for some time now, but I suppose it's gone on long enough where HVO is now starting to get nervous. Mauna Loa is after all, the largest active shield volcano on earth by both volume and height, and given the types of eruptions it has, people on the Big Island of Hawaii have a reason to be nervous.

Nearly all of the recent eruptions of Mauna Loa have produced enough fast-moving pahoehoe lava to reach the shore. Many towns have been paved over in the past, and due to Mauna Loa's size, the lava can move at much faster speeds than the lavas produced by its neighbor to the SE, Kilauea.

Mauna Loa's re-inflation and increased seismicity is still below the levels that preceded the last two eruptions, so an eruption is by no means imminent at this time. That can change without warning, however, this is a heavily monitored volcano, so it's likely there will be at least several hours of warning prior to any eruptive activity.

One theory currently is that due to Kilauea's ongoing eruption (which has continued nonstop since 1983), the magma reservoirs at Mauna Loa take a bit longer to refill, as both volcanoes have the same magma source - a giant magma hotspot that is responsible for the creation of all Hawaii's island chain. So it is possible that the release of lava from Kilauea is keeping Mauna Loa from rapidly inflating like it did in the past.

If that were true, it might explain why inflation is not as rapid, and seismicity is not as intense. Only time will tell. Previously, Mauna Loa had typically erupted before Kilauea, so the fact that Mauna Loa is inflating while Kilauea is erupting could indicate higher plume pressure on the island. Again, far too soon to tell, but it does make a lot of sense.

I've been monitoring Mauna Loa since 2008, and this is the first time that HVO has raised the alert level in a long time. It's worth keeping your eye on the Big Island, and if you live there, be vigilant and stay up to date, as this volcano, once it starts erupting, is capable of issuing lava flows that travel upwards of 60mph.
Posted by Matt at 8:29 AM No comments:

Meru Volcano In Tanzania Had Eruption Scare From Forest Fire

*****UPDATE 9/22*****
The smoke coming from Meru volcano was indeed a forest fire and NOT a volcanic eruption. While it is unclear whether reports of tremors are accurate, it is confirmed that no eruption has taken place.

Meru volcano, which has not erupted in a hundred years or so, may have had an eruption. Reports are coming in from several sources, although all of them are posting the same image. The image appears to show the NE flank of the volcano in eruption, however it is too soon to tell and 'could' be a wildfire. The image does appear however to show large amounts of grey ash, and being a California native, I can tell you most brush fires burn very much darker than that, so it does look like it could be volcanic. 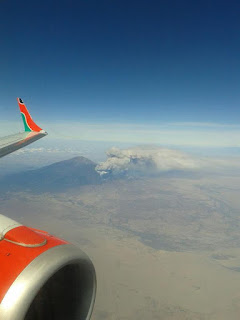 According to Volcano Discovery, "A new eruption has been reported yesterday from the volcano, which has last been active 105 years ago. An ash plume was seen rising approx. 1 km and drifting NW from what looks like a lateral vent on the northern slope of the volcano near Arusha town. The are no reports of damage or fatalities. According to local sources, people in the area around the volcano have been experiencing an increased number of small felt earthquakes in recent months."

The surrounding areas are mostly farmlands with some small villages, so not a very high population center, however any large pyroclastic flows could have devastating consequences for those on its slopes. If the picture (which is a bit hazy) is interpreted correctly, the eruptive center appears to be on the lowe flank of 'Little Meru', a satellitic summit cone/dome to the NE of the main summit (similar to Mt. Shasta's 'Shastina' cone. The blast could be lateral, or there may be a small amount of pyroclastic flow that is travelling down the flank, far too soon to know.

"Meru volcano, Africa's fourth highest mountain, is dwarfed by neighboring Kilimanjaro volcano, but is an impressive peak in its own right. Seen from the west, Meru has a conical profile, but it contains a 5-km-wide breached caldera on the east side that formed about 7800 years ago when the summit of the volcano collapsed. Associated massive debris avalanches and lahars traveled as far as the western flank of Kilimanjaro volcano. Parasitic cones and lava domes are located on all sides; a maar field is present on the lower north flank. The historically active Ash Cone forms a prominent symmetrical cone inside the breached caldera. A second vent between it and the caldera headwall has fed lava flows that cover much of the caldera floor."

At this time however, this could be a false alarm, as there are doubts this is actually a volcanic eruption, and rather could simply be a wildfire. This video seems to suggest it is just a wildfire: