Katla volcano in Iceland has been raised to Yellow status, as a near three day quake swarm is rattling the massive volcano. A warning from Icelandic authorities has been issued as follows (translated):

The contingency plan for an eruption in Mýrdalsjökull has been activated accordingly. Uncertainty phase means that a course of events has started that may lead to natural hazard in the near future. Monitoring, assessment, research and evaluation of the situation is increased.

Increased seismic activity started on September 29 and is still ongoing. Following a meeting with the Scientific Advisory Board of the Icelandic Civil Protection it is likely that the seismic activity is caused by magma movement within the Katla caldera. Three most likely scenarios have been defined.

1. Seismic activity dies out with no further consequences
2. Glacial outburst flood, jökulhlaup, will emerge from the glacier due to a small eruption
3. Eruption starts in Katla Myrdalsjökull that will force its way through the ice with glacial outburst floods and ash fall Accordingly a warning has been issued for travelers in the vicinity of Mýrdalsjökull especially around glacial rivers."

Katla volcano has not erupted since 1918, according to the Smithsonian GVP. It's smaller neighbor, Eyjafjallajökull erupted in 2010, with an eruption of Grimsvötn (Grimsfjall) following the next year.

In the past few days, there have been hundreds of quakes within the caldera under the glacier Myrdalsjökull. This follows the events of August when two earthquakes of mag 4.5 were detected in the caldera. Many of the quakes in the current swarm are 3.0-3.5 in range.

It has been theorized for many years that Katla was 'overdue' to erupt, given that it is typical for Eyja to trigger Katla, or vice versa due to a theory that says the two magma chambers may share a sill that allows their magma chambers to interact.

According to some, Katla may have long been 'primed' for eruption and was awaiting some seismic activity to trigger it, much like Japan's Mt Fuji is theorized to be. It is still of course possible that this earthquake swarm does not end up in an eruption, or has a small sub-glacial eruption, but time will tell. This is a vigorous and apparently escalating swarm. It is a great time to keep an eye on it. There is a good webcam here.


*****UPDATE 10/6/2016*****
After a few days of absolute quiet at Katla following last week's vigorous swarm, a new swarm has begun at Katla in much the same location within it's glacier-covered caldera that last weeks swarm occurred in. So far today, three quakes above mag 3.0 have occurred. Weather interference is preventing some of the equipment from tracking the smaller <1.0 mag quakes, however this should clear up for a short window of seismic recording by sometime tonight.

This does now appear to be volcanically, not tectonically, related. At the time of this writing, this is the current snapshot of the swarm from Icelandic Meteorological Office: 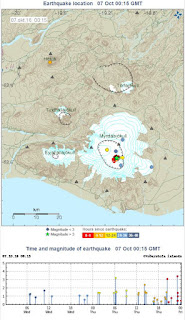 The quakes have so far not resulted in any eruptive activity, although prior to this week, elevated conductivity and gas levels were detected in one of its river outlets. This typically can indicate magmatic activity. Further, some quakes do now show the telltale sign of magma movement.

Meanwhile to Katla's NE, Bardarbunga is again experiencing some heavier seismicity. It is suspected that the fissure eruption to the ENE of it's caldera at Holuhraun could have been a prelude of a much larger event years later.

Other volcanoes showing a bit of life in Iceland include Hekla, which has had several minor quakes this year (it does not typically give warning before an eruption, so quakes are concerning), and Askja volcano to the North of the Vatnajökull ice glacier (which covers Bardarbunga, and Grimsvötn, among other large volcanoes). Askja has been showing increased seismic activity since the dike intrusion and fissure eruption of Bardarbunga. It's last eruption in the early 1900's was one of Iceland's largest since the eruption of the fissure swarm Laki.

Long story short, Iceland is primed to be a hotspot of eruptive activity in the near future, and will no doubt cause more travel chaos in Europe and perhaps the Northern Hemisphere.

Another quake sequence has begun in the last couple hours at Katla volcano. The pulses are now forming somewhat of a pattern, although that probably means nothing. In these 'pulses' of activity, after the larger sequences, the quakes don't seem to go above mag 2.5.

The current quake sequence is more than likely due to magma intrusion. Elevated seismicity within the caldera has now become so persistent, it would be a good bet that an eruption is on it's way in weeks or months. 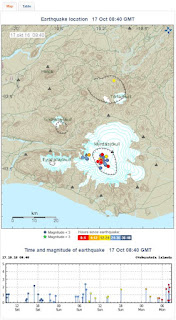 The current activity has resulted in higher gas and conductivity levels within glacial runoff streams. Recent weather diluted the streams with rainfall, and interrupted measurements, but newer ones confirm something is going on under Myrdalsjökull. It is only a matter of time in my opinion.
Posted by Matt at 2:33 PM No comments: