The Hawaiian Volcano Observatory has noted increased rates of inflation at Mauna Loa after the 2018 eruption of Kilauea. Inflation rates are still below the rates observed from 2014-2017, however increased earthquakes and ground deformation have been detected after the Kilauea eruption ended, and show a consistent trend.

The shallow magma reservoirs of Mauna Loa have undergone several periods of inflation since its last eruption in 1984, but all have paused without an eruption.

It is unknown what, if any, connection Mauna Loa and Kilauea share in terms of interactions. Kilauea's magma chamber draining may have allowed more pressure to build at Mauna Loa, or caused changes in the magmatic system. Some scientists have noted that when one volcano stops erupting, the other will begin an inflation phase, occasionally leading to eruption.

HVO scientists are looking at the current state of the volcanoes to test this theory. If Mauna Loa enters into an eruptive phase while Kilauea is dormant, this would lend more credence to the theory that the two volcanoes have an effect on each other. However there have been periods, such as the 1984 eruption of Mauna Loa, where the two have emitted lava simultaneously, but simultaneous activity is somewhat rare, and short-lived.

Currently both volcanoes are at 'Normal' levels of background activity, and no eruption from Manua Loa is imminent or predicted to occur in weeks or months. With Hawaii volcanoes though, activity seems to quickly ramp up before an eruption, so vigilance is always warranted.

You can monitor the inflation of both volcanoes on HVO's website:

What Is Happening Off Of Mayotte Island?

A small French territory island between Africa and Madagascar is making some big news. For several months, the volcanic island of Mayotte, in the Comoros Islands (which has not had a confirmed surface eruption since 2050 BCE) is getting very noisy. So noisy in fact that the earthquakes and seismic noise it is generating has been detected worldwide. And now, scientists say this could be the result of the largest ever underwater eruption in modern history.

Mayotte Island is a volcano, however it has had no eruptive activity in historical times. Offshore however, scientists are detecting very unusual activity, and large earthquakes (a 5.0 temblor struck today following months of other strong quakes), which have generated a 'huge rumble heard all around the world'. A 5.9 magnitude quake struck on May 15, 2018, and since then, the activity has continued. The seafloor off the coast of the island is sinking at a rate of about 0.4 inches per month as well.

This has been interpreted by geologists to mean that there is a large movement of magma, and possible offshore eruption - the largest ever recorded. Due to the depths and pressure, it is unclear whether the magma has broken through the sedimentary layer, or generated a new seamount, but given the length of the activity and amount of magma involved, it is quite possible. No underwater observations have yet occurred, so this is impossible to know at the moment. 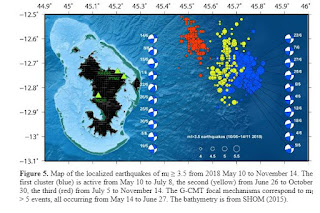 According to the summary of a detailed study published at EarthArXiv, "We believe that the 2018 crisis is associated to an eruption, despite the fact that we do not have direct observations so far. It might be the offshore eruption with the largest volume ever documented."

As for the safety of the island of Mayotte, "If the eruption lasts one year, which is typical for volcanic eruption, the subsidence of Mayotte will exceed 0.1 m which is large but not critical for the inhabitants and infrastructures, and the total volume emitted will exceed 2 (square kilometers). Such volcanic event (sic) near the coast is the largest ever observed and it may be a major teacher for the understanding of how off-shore volcanoes work."

As of today, the activity continues with a 5.0 magnitude quake. Several other large (4.0+) quakes have occurred within the week. USGS does not have instrumentation to show the smaller quakes, but local geologists are monitoring the situation intensely. 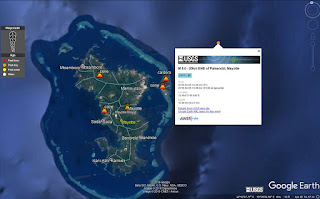 Google Earth capture with my volcano database and USGS plugin showing the location of the last large 5.0 earthquake.

At present, there is no danger to life or property, and the island is safe. With more instruments being deployed worldwide, and with the continuing discovery of underwater volcanoes and their activities, it is likely that we'll be detecting more and more underwater eruptions with better accuracy as time goes on.

This particular eruption however, will fascinate for a long time.