AVO is reporting that seismic activity has picked up at Little Sitkin volcano in the Aleutian Arc. Little Sitkin is one of the farthest volcanoes from mainland Alaska, and is about halfway from Alaska to Russia's Kamchatka peninsula. The volcano does not have a record of historical eruptions, however evidence on the island suggest it may have erupted early last century. A series of sharp and frequent quakes has rattled the island, and has prompted AVO to raise the aviation code from unassigned to "Yellow" (advisory).

AVO's statement is below:

"At approximately 19:15 AKDT (04:15 UTC) last night, a swarm of high-frequency earthquakes began at Little Sitkin Volcano. The continuation of this anomalous seismic activity through the night prompts AVO to raise the Aviation Color Code to YELLOW and the Volcano Alert Level to ADVISORY. No eruptive activity is currently indicated.

AVO is closely monitoring the situation and will issue further updates as conditions changes.Little Sitkin is monitored by a 4-station seismic network as well as satellite imagery. Little Sitkin Island is located 35 km (21 mi) northwest of Amchitka and 320 km (200 mi) west of Adak in the remote western Aleutian Islands. The last eruption of Little Sitkin is questionable and may have been in the early 1900s."

"Diamond-shaped Little Sitkin Island is bounded by steep cliffs on the east, north, and NE sides. Little Sitkin volcano contains two nested calderas. The older, nearly circular Pleistocene caldera is 4.8 km wide, may have once contained a caldera lake, and was partially filled by a younger cone formed mostly of andesitic and dacitic lava flows. The elliptical younger caldera is 2.7 x 4 km wide; it lies within the eastern part of the older caldera and shares its eastern and southern rim. The younger caldera partially destroyed the lava cone within the first caldera and is of possible early Holocene age. Young-looking dacitic lava flows, erupted in 1828 (Kay, in Wood and Kienle 1990), issued from the central cone within the younger caldera and from a vent on the west flank outside the older caldera. Fumarolic areas are found near the western coast, along the NW margin of the older caldera, and from the summit crater down the southern flank for a 1 km distance."

With activity at this volcano now being closely watched, this brings the number of Alaskan volcanoes currently being monitored to three. Cleveland volcano has been having small to minor eruptions for about a year now, and Mt Iliamna was raised to Yellow alert following a series of very shallow quakes, and increased fumerolic activity, however no eruption has happened at Iliamna following what AVO suspects was a minor magma dike intrusion. This brings the total volcanoes in Alaska showing activity to three at this time.
Posted by Matt at 10:44 AM No comments:

A large earthquake swarm is occurring in the Salton Sea area just NW of Brawley, CA. The largest event so far has been a mag 5.4 tremblor which I personally felt at my home in San Diego. I am currently watching the action happen on the USGS site, and my real time Google Earth plugin. USGS reports the quakes at shallow depths of 13km (at the deepest) to <1km at the shallowest. The swarm has generated over 25 quakes at this time and is ongoing, with quakes actually getting more powerful at this time. Within one hour there were one 4.9, two 4.5 quakes, a 4.3, two quakes of 5.3 mag, plus many mag 1.0-3.9 quakes. Many smaller tremors are occurring.

The center of the activity is quite concentrated on the fault line that runs through Brawley and the Salton Sea (Salton Buttes) area. This area does have active geothermal prospecting, as well as a history of volcanic eruptions, although it has not occurred during historical time.

As these quakes are currently happening there is no data to suggest whether or not the quakes are purely tectonic, or possibly volcanic in nature. The area sees a large number of earthquakes each year, however this swarm is particularly intense for the region.

The region was shaken in 2010 by a large 7.4 magnitude earthquake centered near the Cerro Prieto volcano in Northern Mexico. The area has seen a rise in the number of very small quakes since then.

I will update this story as more info becomes available through USGS and other news media.

Below is a screen cap of the current state of the swarm, with the largest quake highlighted. 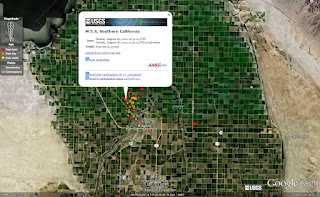 Here are some links form local news about the quakes, I will add these links as they become available.

In a statement form USGS, they stated:

“[The Brawley Seismic Zone] is a broad zone with lots of little faults,” explained Abbott.“This area has clearly activated. We will likely experience swarms of 3, 4 and 5-magnitude [earthquakes] but they are not likely to increase in intensity. Of course, there are no guarantees on this, but history says they likely won’t get bigger – that we will experience more of the same or smaller quakes,” he added.

The Earthquake swarm has subsided. The majority of the quakes occurred yesterday, and slowed down to normal regional levels by late night/afternoon. Although some geologists were saying that the fault line had 'activated' and that there will probably be thousands of similar events in the coming weeks/months, I would suspect that the main events are over and we will see maybe 10-12 smaller quakes a day until even that activity subsides.

The quakes were activated by an intersection of fault lines at the base of the San Andreas fault. The area is rife with many relatively small fault lines. The last time the area was this active was in the 1970's, and before that in the 1930's. It's starting to make a pretty neat pattern of 40-year periods of quiescence, which is probably not significant in the grand scheme of things, but something worth noting nonetheless.

As I can say from firsthand experience, the shaking in San Diego was very light, almost not noticeable. The folks out there in Brawley had some minor damage to trailers, some structures, and some things were shaken off of shelves. By and large all damage was minimal, but many reports point to scared children who did not wish to go back in their houses for the night, and I am sure many residents were a bit spooked by the frequency of the quakes. one resident said they felt like they were popping off nearly every few minutes.

So far this morning, things appear to have calmed down quite considerably. The below picture shows all the quakes from yesterday's swarm. 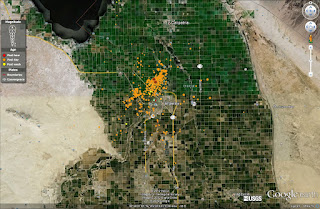 After the quake swarm, scientists are weighing in on the causes. Most scientists say this is likely just a tectonic swarm, but Julie Dutton with USGS says "In volcanically active areas, earthquake swarms often indicate imminent eruptions, Dutton said. The only potential candidates for volcanic eruptions near Brawley are the Salton Buttes, five small lava domes that flank the Salton Sea and haven't erupted in close to 10,000 years." (From MSNBC.com).

While, yes, the area has not erupted in 10,000 years, it still remains geothermally active, and the area is used for geothermal energy. Chaiten volcano in Chile blew after over 10,000 years of silence, with no warning, so the possibility does always exist, however unlikely it might be. A real indicator of an imminent eruption however would be if the swarm is sustained, and the quakes grew shallower and shallower (indicating rising magma) which did not occur in this particular case.

The quakes ranged from some 13km below the surface to nearly at the surface, in a highly randomized fashion that does not seem to point to magma intrusion in the area, but like most rift-zone volcanoes, the process is highly unpredictable. More than likely the area will not see any volcanic activity for many decades to come.
Posted by Matt at 12:48 PM 8 comments: