Video Of Bison Fleeing Yellowstone Has Some Worried

Youtube video of bison seemingly running out of Yellowstone park along a road way has sparked speculation among the paranoid and reactionaries that Yellowstone is preparing for either a large quake or an eruption. This comes on the heels of a magnitude 4.8 quake that recently struck Yellowstone's northern area, which was the largest single event in several decades (although very small by any real standard, and barely felt by anyone).

All of this paranoid and panicked speculation by non-experts has actually prompted the USGS to release a statement, explaining very clearly how Yellowstone is in no way near an imminent eruption.

The bison on the video are doing what they do every year, without fail. They are migrating to better grazing grounds. And would it surprise you to know that animals sometimes run? Me either. The Internet has given paranoids, reactionaries, and sensationalist journalists and news stations all the tools it needs to generate clicks. Would it surprise you to know that literally every Yellowstone article I write gives me a large increase in traffic? It is always important to be critical of any article that claims 'The world will end'. It will end when it ends, and not a moment sooner.

As the USGS puts it:

"According to the park, any animal migrations are typical for this time of year. Most of the recent videos on the internet that show running bison were filmed weeks (at least) before Sunday's earthquake. Park spokesman Al Nash discusses this and other topics in a YouTube video."

So of course not only is the video out of context, but the people stirring this paranoia are doing it simply to get attention, and page clicks (I will myself admit, that due to the popularity of this subject, I did feel compelled to write about it, however, with the purpose of giving an ACCURATE account...).

In any case folks, you have NOTHING to worry about. Yellowstone has been rumbling away since the dawn of man with nary a peep, and it is one of the best monitored volcanoes on our planet. If anything was going to happen, not only would USGS (and myself) pick up on it and alert you immediately, but we would have far advanced warning.

A massive 8.2 magnitude earthquake struck Chile off the coast of the city of Iqueque. A tsunami alert was issued, and tsunami waves hit along Chile's northern coastline. The tsunami wave is expected to affect Pacific islands in its path.

No reports of damages or injuries yet, but certainly this will change.

The 8.2 magnitude earthquake will likely disrupt volcanoes int he area, of which there are many. It is far too early to determine which ones may be affected. A large 8.0 quake several years ago did end up disrupting some volcanoes, and some theories point to the quake being responsible for the long-dormant volcano of Chaiten's eruption. 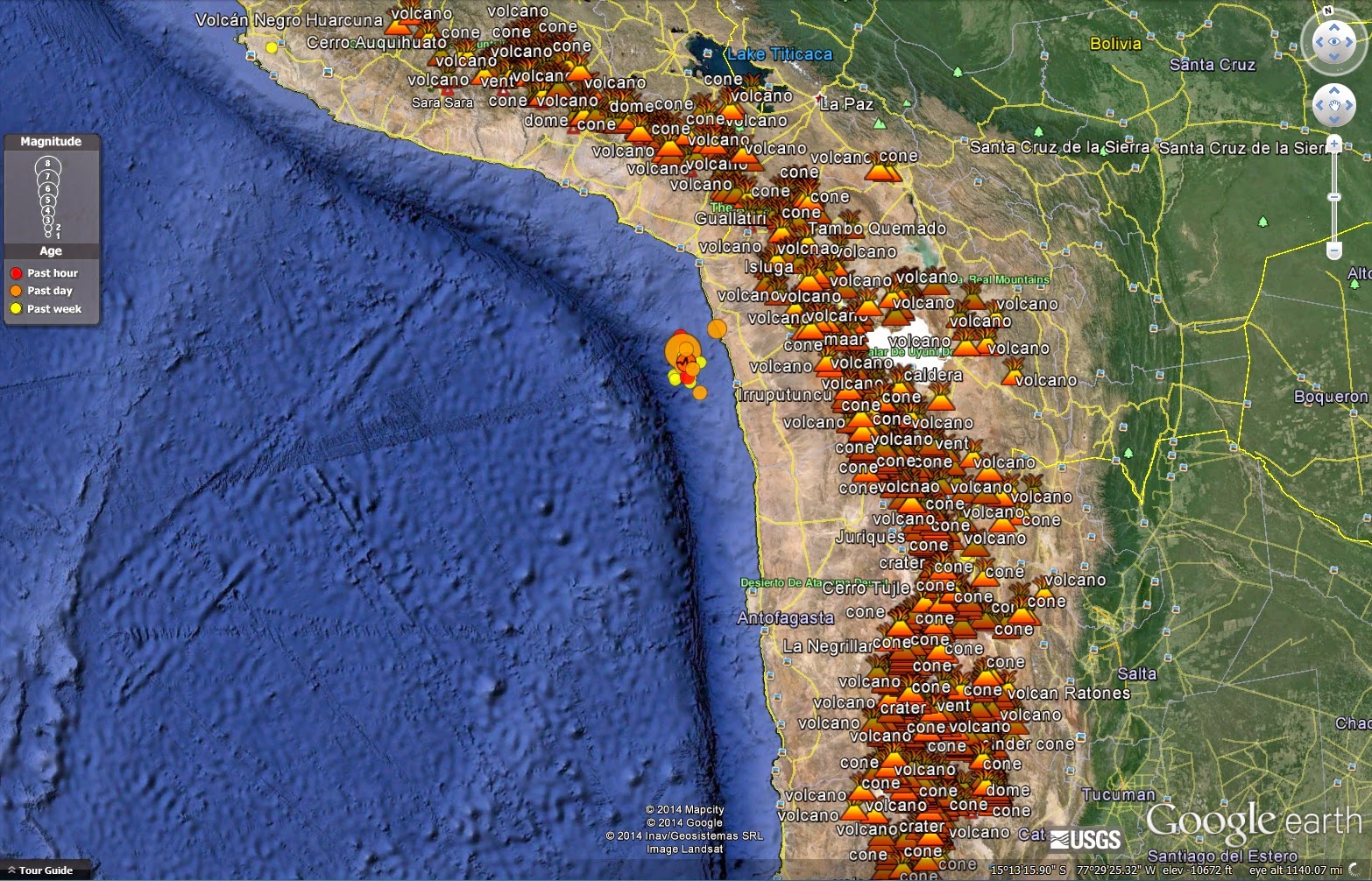 Many large aftershocks should be expected, and already several 6.0 and above have struck. The area will likely be highly unstable for several months.

I will update this post as more news develops.

6 people were killed, and more were injured, although the total casualties seem very low. A prison was damaged, and up to 300 inmates have escaped. Over 130 of them have already turned themselves in. A tsunami warning was lifted for any lands in the suspected path, and no significant tsunami waves are expected. MANY aftershocks can be expected to follow. It is still unclear whether or not this quake will affect nearby active volcanoes, but it is a good bet that it will, eventually.