A 7.0 Quake struck SE of Adak island in Alaska's Aleutian islands today, according to USGS. The quake was followed by several aftershocks, one of mag 6.6 in the immediate vicinity, and followed to the East by a 6.8 magnitude tremor. More aftershocks are likely to occur for a few days. 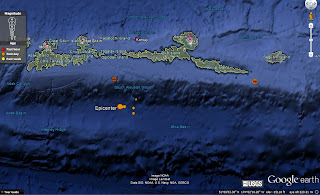 
The initial 7.0 quake was at a depth of approximately 21.4mi. No tsunami was generated according to USGS/NOAA. This occurred along the Aleutian subduction zone, where larger quakes are quite common.

There are no major population centers near the earthquake epicenter, with the nearest populated location being Adak, a port city that serves fisherman/crabbers in the Bering Sea. No damage has been reported.
Posted by Matt at 11:10 AM No comments:

Papua-New Guinea's island volcano Manam has had a very large eruption, sending ash some 15,000 feet into the air, according to John Seach, an Australian volcanologist and frequent source of news from the Southern Hemisphere's volcanoes. John Seach's Twitter feed said about 3 hours ago: 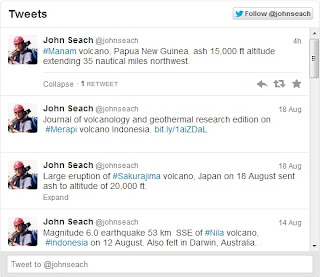 Since I am personally not into Twitter, I have not linked the exact feed, just provided a screenshot, but you can get John's info there. He's a good resource for eruptions the rest of the world doesn't really cover. 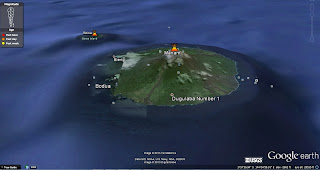 
Manam volcano is one of Papua-New Guinea's most active volcanoes, typically erupting several timesa year. This is a larger explosion than normal, and has probably produced some amount of pyroclastic flow. The volcanic was previously inhabited, with sparse villages around the circumference near shorelines, which can still be seen on Google Earth, but no current population remains. The island was abandoned completely in 2004, when 9,000 resudents were relocated. It is unclear at this time what direction the pyroclastic flow (if any) or ashfall is going, but an eruption this large I am assuming might prompt an evacuation.

No other news outlets are covering this eruption as of yet. The only population statistics on the island can be found here. The government had recently updated its disaster preparedness plans due to the large amount of volcanoes both active and dormant in the vicinity. Manam volcano and Papua-New Guinea are part of the Pacific Ring of Fire, a 'ring' of volcanoes that spans the boundaries of the Pacific Plate.

The Smithsonian GVP characterizes the volcano as follows:

"The 10-km-wide island of Manam, lying 13 km off the northern coast of mainland Papua New Guinea, is one of the country's most active volcanoes. Four large radial valleys extend from the unvegetated summit of the conical 1807-m-high basaltic-andesitic stratovolcano to its lower flanks. These "avalanche valleys," regularly spaced 90 degrees apart, channel lava flows and pyroclastic avalanches that have sometimes reached the coast. Five small satellitic centers are located near the island's shoreline on the northern, southern and western sides. Two summit craters are present; both are active, although most historical eruptions have originated from the southern crater, concentrating eruptive products during much of the past century into the SE avalanche valley. Frequent historical eruptions, typically of mild-to-moderate scale, have been recorded at Manam since 1616. Occasional larger eruptions have produced pyroclastic flows and lava flows that reached flat-lying coastal areas and entered the sea, sometimes impacting populated areas."
Posted by Matt at 10:47 PM No comments:

Sakurijima volcano, a large stratovolcano located within the Aira Caldera, has had its nearly 500th eruption of 2013, and this one has shattered some records. A massive gas and ash plume rose above the volcano today, reaching 16,000 ft or more (5,000+ meters) into the sky. Ash rained down on nearby towns and people are using rags and masks to breathe if they venture outside. Video footage showed a large explosion of dark ash, followed by a large plume of grey ash rising far above the volcano.

According to Japan's Meteorological Society, this is the highest ash plume since records began being kept in 1955. Sakurijima is one of Japan's most active volcanoes. Although fatalities are quite rare, it has killed in the past with pyroclastic flow. Currently there is a several km wide exclusion radius from the summit area, so injuries are rare as well.

600,000 residents are currently experiencing ashfall and should remain indoors if possible. Inhaling volcanic ash can be deadly or cause serious damage to lung functions, as well as it being an extreme irritant to your eyes. Volcanic ash is made up of very tiny particles of volcanic glass, and literally cut through your soft tissue, making your life miserable.

Sakuriajima has been in a heightened state of eruption for the last decade or so, erupting frequently and powerfully.
Posted by Matt at 4:04 PM No comments:

Indonesia's Mount Rokatenda erupted today, killing 6 and evacuating over 3000 from the island of Pulaweh. The volcano had been showing signs of unrest since October 2012. Three adults and two children are confirmed dead, while the sixth person remains unidentified. The bodies have not been recovered as the eruption is ongoing, and efforts are focused on evacuations.  The bodies of two adults have since been recovered, however the bodies of the children remain on the island.


It was later confirmed that the victims were killed by pyroclastic flow, one of the most deadly and swift effects of explosive eruptions. Those who have been evacuated will be relocated to nearby Flores Island. 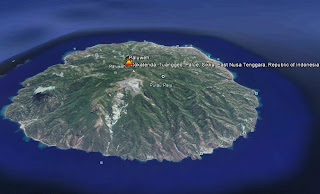 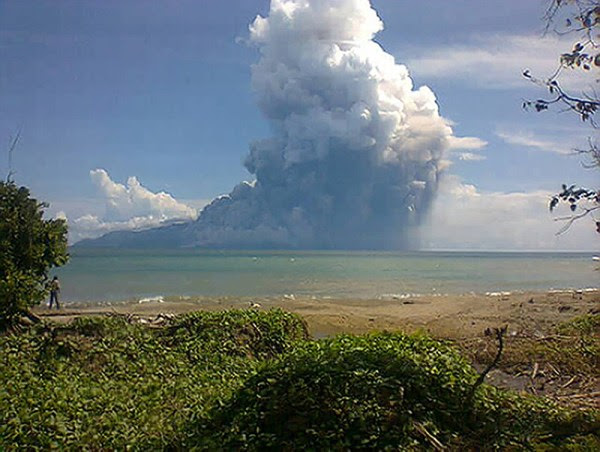 Image of the Eruption from NBCnews.com
From the images, the eruption appears to be explosive and pyroclastic in nature. Pyroclastic flows are able to accelerate when travelling over the ocean's or other water bodies' surface. The island is about 11 miles from the nearest shore. It would be inadvisable to stay near this shore until activity calms down. If any updates are posted, I will update this post.

Idonesia is part of the so-called "Ring of Fire' a 'loop' of volcanoes spanning the boundaries of the Pacific tectonic plate. Eruptions on the Ring of Fire are from some of the world's most active volcanoes

I am very happy to say that since the launch of this blog, I have hit over 100,000+ page views! Thank you all very much for reading my blog, and I hope it has been as fun for you to read as I have writing it! I launched this blog in part because I felt there was a lack of good American-English reading volcanology blogs, and I wanted to create a site where people could read about current eruptions, earthquakes, and access some very cool online geology resources. I hope I have achieved that goal!

Thank you all for reading!

Yellowstone National Park, and its enormous super volcano is home to more than half of the world's geothermal geysers. There are probably not a lot of people in the world who aren't familiar with the name "Old Faithful", one of the most famous geysers in the world, known for its punctual eruption timing, and spectacular steam and water spouts. Yellowstone on Wednesday got quite the surprise when one of it's less-reliable geysers had a sudden - and massive - burst of steam that rose nearly 400 feet into the air for about 40 minutes.

It has been 8 years since "Steamboat geyser" has erupted. It is one of the most random geysers in the park, and dwarfs the eruptions of "old Faithful" (to be clear, the term eruption refers only to hydrothermal activity, not magmatic in nature). Video on NBCnews.com shows the hastily recorded cell phone footage from surprised guests (unfortunately it's not terribly great, and you cannot see the beginning of the blast).

Yellowstone is home to 300 or more active or potentially active geysers, with even more hot springs, and other hydrothermal features. The last magmatic eruption of Yellowstone occurred somewhere around 1350 BCE, creating the Indian Pond crater. Some scientists believe Yellowstone is 'overdue' for a major eruption, but of course this is speculation, and very specific conditions would need to occur for a modern day super-eruption to take place. If an eruption does occur in the near future, it would likely be a small effusive, or minor explosive event, much like the Indian pond event.

The magma chamber that is the source for the geothermal heat in the are is vast, but cooling. It is made up of what scientists refer to as a 'crystal mush', or partially cooled lava. It would take a very large injection of fresh magma and gasses to initiate an eruption in Yellowstone, and no injections have been detected in recent time.

So for now, Yellowstone rises and falls, breathes in and out like a sleeping giant.
Posted by Matt at 2:41 PM No comments: