AVO has raised the alert level of Veniaminof volcano in Alaska to alert level orange. This follows after about a week or so of "yellow" status as seismic swarms were detected underneath the large stratovolcano. Steaming was previously noted at its central cone, and corresponded with heightened seismicity.

The Orange alert occurred within the hour of this blog post, after satellite data showed a thermal anomaly on the volcano's surface.

AVO's statement is below:

"Elevated surface temperatures observed in satellite images of Veniaminof Volcano this morning at 13:25 UTC (05:25 AKDT) indicate an eruption at the intracaldera cone is likely underway. AVO is thus raising the Aviation Color Code and Volcano Alert Level to ORANGE/WATCH. Seismic tremor continues and is indicative of low-level effusive activity and small explosions. No ash plumes have been observed this morning although clouds have obscured web camera views of the summit.

AVO has been monitoring Veniaminof closely since elevated levels of seismicity became persistent on June 8. Steam plumes issuing from the intracaldera cone have been observed in web camera views since then, but so far no ash emissions have been confirmed. Recent eruptions of Veniaminof Volcano have all occurred from vents located on the intracaldera cone and were characterized by brief bursts of ash emission and small explosions. Ash plumes associated with this type of activity are typically diffuse and generally do not reach more than 20,000 feet above sea level. Ash fallout is typically limited to the flanks of the volcano. Minor emissions of steam and ash may persist for for weeks to months.

It is possible that the interaction of molten rock and ice can cause the emission of very fine ash, much like the Eyjafjallajökull eruption in Iceland, 2010. However this volcano is not in the same volcano-tectonic situation and likely will produce a smaller, shorter lived eruption than its Nordic cousin.

Volcanoes on Alaska's Aleutian peninsula are not typically deadly, as the area is sparsely populated, although they do sit directly under a heavily used airway. Airplanes are frequently diverted out of harm's way when an Alaskan volcano erupts, sometimes causing major inconvenience for air travel and freight.

You can check out the updates here:

The eruption of Veniaminof brings the number of currently erupting U.S. volcanoes to about 5 (three are in Orange Alert status, two are in Yellow).

The eruption History according to the Smithsonian does list at least on VEI 6 level eruption, but typically they have been level 1-2.

Reports are coming in from the Smithsonian GVP about increased seismicity at Cerro Negro, a very young pyroclastic cone in Nicaragua's state of Leon. Cerro Negro is the youngest of several cinder cones in the region, and one of the newest volcanoes of South America. Since its birth in 1850, it has been one of Nicaragua's most active volcanoes generating frequent ash fall and lava flows.

The statement from the Smithsonian GVP on social media is:

"Yesterday the Instituto Nicaragüense de Estudios Territoriales (INETER), reported elevated seismicity and the onset of tremor. RSAM had increased approximately 7 times the average value (of 14 to 60 units). Our last GVP Monthly report noted that from 2005 to 2011, RSAM rarely reached above 30 units (http://www.volcano.si.edu/volcano.cfm?vn=344070&bgvn=1&rnum=region14&snum=nicarag&wvol=cerroneg&tab=1#bgvn_3701).

INETER issued recommendations to municipal and civil defense authorities to restrict access to the volcano due to changed seismicity. Between 15:35 and 17:31 yesterday, a total of 49 small magnitude EQs were detected, however, they were too small to locate."

The post was accompanied by a picture (below) of the current seismograph that has scientists alerting the area to the possibility of an eruption. 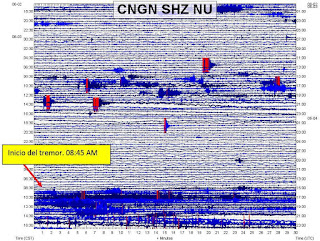 The Smithsonian GVP characterizes Cerro Negro as last having erupted in 1999, and had seismic episodes up until around 2003. Since then it has remained relatively quiet. 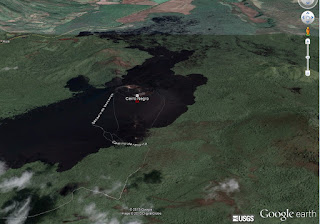 Image from Google Earth showing the latest satellite photos of Cerro Negro, Nicaragua.
If Cerro Negro does erupt, it will likely not be a danger to the general population, aside from fine ash fall in the near cities. People in the area would be well-advised to stay indoors if this were to occur, or wear breathing masks and googles outside. Volcanic ash consists of very fine glass-like particles that can cause severe respiratory distress (due to your lungs being cut up) and can cause severe eye irritation and damage for the same reasons. The ash fall would likely not travel for too far in this case, as it is much denser than say, the ash erupted at Eyjafjallajökull in Iceland, which generated fine ash due to its lava colliding with ice.

If Cerro Negro erupts, I'll try and update this post with some pictures and/or webcam links!