Katla and Bardarbunga Rumble In Iceland

Katla volcano, and its neighbor Bardarbunga are putting on quite a seismic show in Iceland as of late. Weekly to monthly quakes above magnitude 3.0 have been occurring at both volcanoes, raising anxiety about if or when both of the giant volcanoes will blow. The 2010 eruption of Eyjafjallajökull still fresh in the memories of Europe, when it paralyzed national airports and cost billions to various economies.

Katla volcano is stealing the show today, with large earthquake sequences pulsing now almost daily (which is rather unusual behavior in recent times). It is probable that this is related to magma movement under the crust, and the depths of these quakes are getting shallower. Katla has long been thought 'overdue' for an eruption, although no volcano is ever truly 'overdue' as they do not have scheduled eruptions. 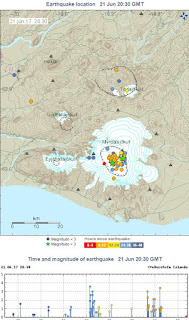 Katla is thought to be connected in some way to its neighbor Eyjafjallajökull via a magma sill, but the two magma chambers are considered separate. Historically (according to evidence) Katla typically erupts soon after Eyja. This has not occurred yet, although it is suspected a minor subglacial event took place in the year after Eyja's eruption, which was indicated by harmonic tremor and glacier outburst flooding. If there was an eruption, it did not breach the icecap.

Bardarbunga is also rapidly inflating, and has regular quakes within its caldera, and along the old fissure from the Holhuraun lava field eruption. During Bardarbunga's last eruption, the caldera floor dropped many meters, indicating magma chamber drainage via the fissure to its NNE. Current activity has resulted in weekly quakes within the caldera with one or two quakes over 3.0 per pulse. The depths of the quakes and continued deformation indicate that Bardarbunga is far from done with its currently active cycle. 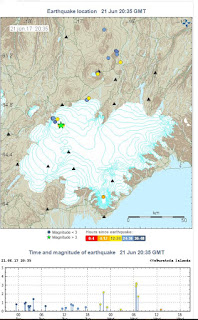 For now nothing seems imminent, but it is especially prudent to keep up with Katla at this time.