A 7.0 magnitude quake has occurred along the subduction zone in northern Peru, along the Pacific Ring of fire. Nearby Holocene volcanoes are Sara Sara, Coropuna, Andahua-Orcopampa, Huambo, and Sabancaya. The nearest volcano is Sara Sara, which last had an eruption during the Holocene, but historical eruptions are uncertain at best. Ash layers in peat moss do suggest somewhat geologically recent activity. The nearest historical volcano is Andahua-Orcopampa, which according to the GVP had its last eruption in the early 15th century. Sabancaya has also shown recent unrest, but is pretty far from the epicenter.

The tremblor prompted officials to issue a tsunami warning for the South Pacific, which is probably out of an abundance of caution, rather than because a tsunami was generated.

Damage has been reported in nearby towns, however no deaths or injuries are yet apparent. 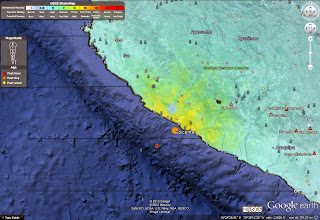 Screenshot of Google Earth with USGS overlay, and shakemap.

Earthquakes of large magnitude are common in the region, and along the majority of the subduction zones of the Pacific Ring of Fire. Peru typically has several large quakes a year, as well as Chile, which had a magnitude 8.8 quake several years ago that created a small tsunami. By the time the tsunami reached the big island of Hawaii, it was only a couple of feet (if that) high, and created very little damage apart from knocking a few boats around. The tsunami from the 2011 Japan quake, in contrast, was generated by a magnitude 9.0 subduction quake, which was able to cause damage as far as Southern California in the US.

A 7.0 earthquake is unlikely to generate a significant tsunami.

A very large and relatively shallow quake has hit Pakistan today, causing a lot of damage, and fatalities. The quake struck near the country's southern shore, near the town of Parwān, about 173 miles NW of Karachi. The quake was strong enough to be felt throughout the region from India, to Afghanistan, to South Eastern Iran. 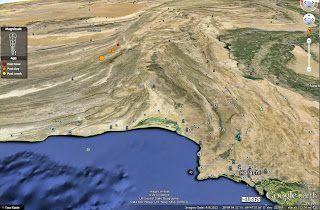 Image of quake epicenter from Google Earth with USGS plugin.

The quake occurred along a meandering strike-slip type fault, which has the potential, much like California's San Andreas fault, to generate large quakes up to and possibly exceeding 8.0 in magnitude.

So far at least 5 fatalities have been reported, as well as damage to buildings in the area. 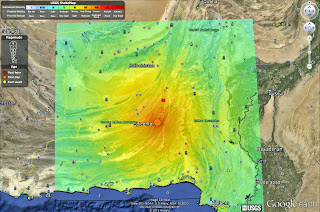 Image of the quake 'shakemap' (legend is at the top of the screen) detailing the strength of the quake in relation to its epicenter.

At this time, at least 5 large-ish aftershocks have struck NNE of the epicenter, ranging from magnitude 4.7 to 5.9. More aftershocks are likely to hit the area for a period of several days to several weeks.

It is also likely that the list of injured or dead may increase as more information becomes available. The area where the quake struck is remote with several large villages nearby, but no major cities, and this is the area where the shaking was most intense. If any significant updates develop, I will update this post.

The quake was apparently powerful enough to cause some land to uplift, and a 30-40ft high island was actually created off of the coast due to the uplift! The island is around 100 feet long, and about one mile off of the coast.

We also know now that the quake has unfortunately killed around 250 people. (correction, the toll is now at around 330 people, and there are approximately 445 injured at this time)... The area is populated densely, but the buildings are not modern in any sense of the word, some being made of stones and mortar.