A cluster of large earthquakes occurred 12/28/2016 along the CA-NV border with three main events followed by hundreds of smaller quakes. This occurred just north of the Aurora Crater volcanic field along a fault that trends from the Aurora Crater area to Lake Tahoe to the NW. The quake sequence, according to geologists, was tectonic in nature and not related to any volcanism. The last volcanic activity in the area occurred ~25,000 years BP (although the volcanic features are well-preserved due to the arid climate).

Three large quakes struck within hours of each other, at depths ranging from 12km to around 6km. Two quakes registered magnitude 5.7, and were reportedly felt as far away as San Jose to the WSW. The third registered at 5.5, with many aftershocks. 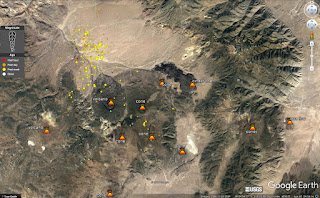 According to the Smithsonian GVP, the Bodie-Aurora field is described as follows:

"Aurora-Bodie volcanic field in west-central Nevada near the California border NNE of Mono Lake contains well-preserved cinder cones and lava flows of late Pleistocene age. The most prominent feature, Aurora Crater, is a 25,000 years before present cinder cone surrounded by lava flows. Mud Spring volcano is another late Pleistocene vent with a well-preserved lava flow. Older volcanics of the field include Pliocene andesitic lava domes and Pliocene cones such as Beauty Peak and Mount Hicks."

It is highly unlikely that volcanism is in any way related to this swarm, but full analysis of the swarm is not yet completed by CalVO. Aftershocks are likely for some time, and there is of course always a slight risk that these events could be foreshocks to a stronger event.

Campi Flegrei Could Be Close To An Eruption

A new scientific paper published by Italian and French volcanologists is raising anxiety levels over the possibility of a new volcanic eruption from Italy's version of Yellowstone - Campi Flegrei. The Flegrean Fields have long been known for their simmering hotsprings and fumeroles, and it has been known for decades that the land was rapidly inflating. Ancient ruins that showed signs of previous submarine immersion are a-plenty in Naples, and the landscape betrays a violent past.

Geysers, solfataras (which coincidentally owe their name to the region), mudpots, fumeroles, and gaseous fissures plague the region, and new gas vents have recently opened up as the land expands. Now, as it turns out this could spell absolute disaster for Italy, which has already experienced an unfortunate amount of strong earthquakes. Campi Flegrei is near ready to rupture, according the the study.

Now, take this with a grain of salt here, this report does not mean the eruption will happen tomorrow, if at all. But if current trends continue, it does not look good.

There is of course a vigorous debate as to whether inflation in the region is caused by the injection of mew magma into the supervolcanic magma chamber, but competing theories suggest the deformation is hydrothermal in nature. Neither scenario is particularly great.

If the deformation and inflation of the volcanic system is *only* hydrothermal, this could easily end up being a catastrophic phreatic eruption. This could be just as powerful as any fresh magmatic eruption, though likely brief. However if this is the result of new magmatic injection, as the study (linked at top) suggests, then this is definitely very bad news.

The study indicates that there is a 'point of no return' in regards to gas concentration and temperature, where gases that decompress could be hot enough to overcome the tensile strength of the crustal ceiling of the magma chamber, which would result in rapid decompression - an eruption. The study bleakly suggests that this threshold is RAPIDLY approaching. And if this is true, and the current rate of inflation holds steady, then Campi Flegrei is likely to erupt. How strong, nobody is sure, and when, or how strong cannot be accurately predicted.

A super-eruption of Campi Flegrei would immediately put the city of Naples in dire peril, if not effect outright annihilation. The initial eruption would quite quickly generate a tsunami and ash cloud, with the tsunami wiping out vast areas of coastal Tunisia and Algeria. The ash fallout (depending on wind currents) would likely circumnavigate the globe in days to weeks, ushering in a global winter for many years. Keep in mind, the famed 'year without a summer' was generated by a *mere* VEI7 eruption of Tambora. A VEI 8 is at least a thousand times more powerful.

The last super eruption seen by mankind was the eruption of the Toba supervolcano in Indonesia, some 75,000 years ago (according to ice cores and sediment records). This reduced a robust population of early humans down to about 5,000 individuals according to genetic and geological/archaeological studies. Today's human population has a better shot at survival due to our level of technological development on many fronts, but the poorest areas of the globe would likely suffer devastating losses. 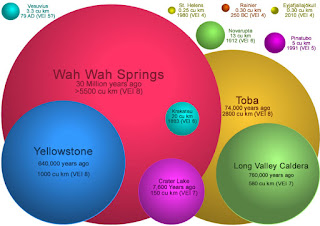 To put this into visual perspective....


Italy as thus increased the threat level of the volcano from "green" to "yellow" warranting urgent study. If in fact this giant is ready to blow, we'll likely need all the information we can get, and as soon as possible.
Posted by Matt at 11:31 PM No comments:

AVO has reported (so far) two POWERFUL eruptions from a remote Aleutian volcano, Bogoslof. Bogoslof Island has had many historical eruptions, but is quite remote. Today, pilot reports came in detailing a brief (about 30 minute) long eruption, which produced a high ash column of about 34,000 feet. A second eruption (which has just occurred) has produced another ash column of 35,000 feet. Not small eruptions for any stratovolcano. 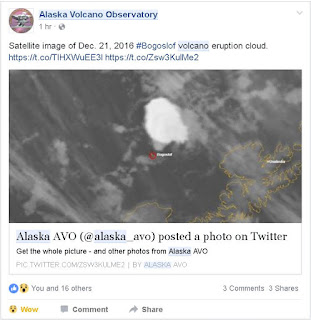 Post from AVO showing Satellite imagery of the eruption of Bogoslof. 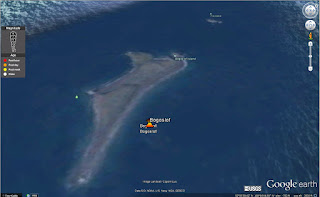 At this time it is unknown what effect the eruption has had on the islands morphology, as many different types of eruptions have occurred here, each leaving a distinct remnant which is typically swiftly eroded (as many oceanic volcanic islands are).

I will continue to update this post with further developments.
Posted by Matt at 9:28 PM No comments: