Nobody at all is reporting on this, although it's no secret either. There is an oddly shallow and very active quake swarm occurring in NW Nevada, about 65 KM ESE of Lakeview, Oregon (as USGS reports it) and it has been going on now for over a week and a half.

The area the quakes are occurring in does not seem to have any significant human population, and appears to be mostly mountainous desert, overlain by igneous rocks of what I'm guessing are older than pliestocene. There isn't a lot of info on the area, much less any geological information I'm able to find.

In any case it appears to be a long series of very shallow quakes ranging in size from <1.0 to greater than 3.5. The area does appear to be on a spreading rift, and probably has a past history of volcanism, but there are no records to confirm this.

As these quakes have ranged in depth from <2km to near surface, I'd say we are looking at a purely teconic event, and nothing related to volcanism. Again, there are no news articles or blogs I'm able to find. Below is a screenshot. 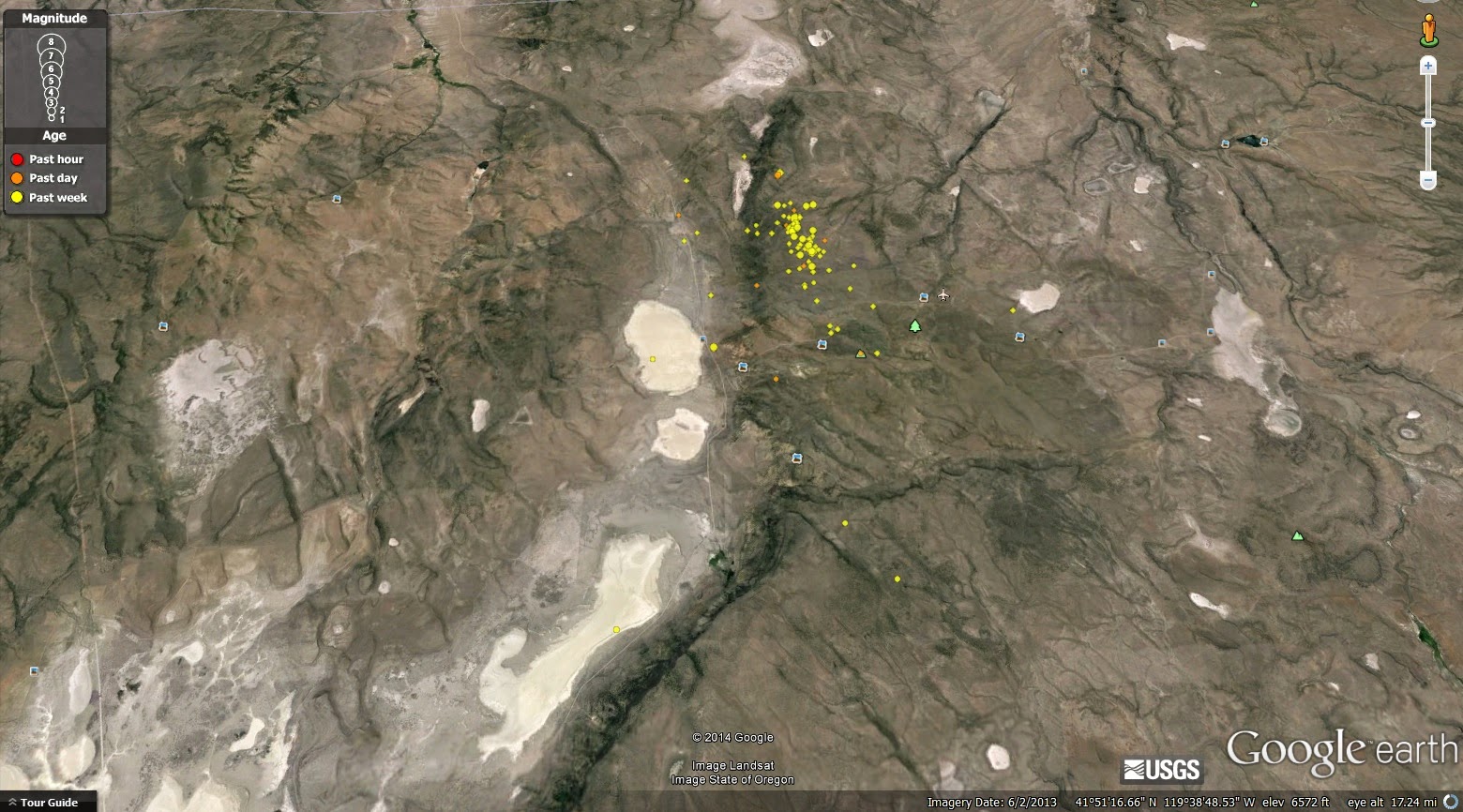 I'm purely writing about this out of curiosity, and want to keep speculation to a bare minimum. I wonder if any USGS people would like to comment on what they suspect this is? It's happened before!

*****UPDATE 8/21/2014*****
Looks like the media and geologists are finally taking notice of this quake swarm. So far, indications are that it is purely tectonic, but they don't know yet. The area has a history of tectonic activity, however this swarm appears to be unprecedented for the region. Here are the few reports I could find on this:

The quake swarm in NW Nevada continues, adding a magnitude 3.8, 3.2, and numerous smaller quakes. All are occurring at depths less than 2km, and some (probably not manually reviewed, and auto-detected quakes) are occurring near or at the surface according to the data feed (which is probably not accurate). So far there is no analysis from USGS aside from what has been briefly mentioned in articles. This 'swarm' is interesting at least to me. There are volcanic basalt cliffs in the area, and it does appear to be part of a rift zone. There is little to no human population in the area, and I am wondering if anyone has visited it to gain some visual observations, or install more instrumentation. At this time, it's being reported that this is purely tectonic, and there are no reports of anything to suggest otherwise, however volcanic activity or dike intrusion can't be ruled out given the composition of the surrounding rocks. Something odd is going on up there.


*****UPDATE 11/6/2014*****
Surprisingly, this swarm is still active. A 4.7 magnitude quake, and a 4.6 are so far the largest quakes of the resurgent swarm. There is no explanation from USGS other than 'this is probably tectonic'. I tend to agree, as the quakes are extremely shallow, in some cases appearing to be so shallow it reads as '0.0 km depth'. However, the 4.7M quake was at a depth of around 5km, which can indicate some sort of volcanic origin. It's still way to early to tell what's going on, and without comprehensive analysis by USGS or a geologist, I still have no new info to really put forth, other than the swarm has been active now for months, which is certainly unusual. I can find no analysis, GPS charts, or otherwise to give any more details, but I will follow up when any info comes out (I am keeping my eye on this). Stay tuned!

The quake swarm continues, with USGS releasing a statement saying they are finally going to be out in the area installing new equipment, which should give us a much better picture about whether this even is simply tectonic 'exfoliation' events, rifting, or perhaps even volcanic (which is highly unlikely, but not impossible). The duration of the swarm is still quite interesting, as it has now been occurring for several months now.

Seismologist have indeed installed new equipment, hence the better depth readings. They are working out whether or not this is volcanic or tectonic, as reported in the above link:

"Bill Hammond of the university’s Nevada Geodetic Laboratory said that while some residents wonder if the latest swarm is related to an extinct volcano in the Sheldon wildlife refuge, experts think it stems from the region’s faults. However, conclusively ruling out a volcanic source will require the additional seismic and geodetic measurements closer to the events,"

Amazingly this swarm is STILL ongoing with little to no difference in behavior. USGS is still installing new instrumentation in the area, according to the latest info. So far they have not updated their previous statements that this is tectonic in nature. I have no cause to disagree.

I know I'm starting to sound like a broken record at this point, but yes, this quake swarm is STILL ongoing. And thus far STILL no concrete answers from USGS other than "This is probably tectonic". Quakes are still at depths ranging from 9km to under 3km, and raning in magnitude form quite small up to 4.8. Other nearby areas appear to be being tectonically disturbed by this activity, as there has been some action now to the ENE of the swarm a couple miles away. Absent GPS deformation data, all the data that exists is quake depths. USGS isn't raising any volcanic alarm bells, so it's probably safe to say still that this is not volcanic in nature, however that has not been ruled out. If it was volcanic however, you'd expect that the quake depths would get progressively shallower, which hasn't exactly occurred (they seem to be very random). Some theories abound as to whether this is related to stresses on the Cascadia fault, but I find this a bit unlikely. Yes, the fault is 'locked' and is generating an immense amount of pressure which will result (possibly soon) in a very large quake off the Oregon coast, but I see no reason to believe that the Nevada quakes are in any way related at this time.

Regardless, this is a very interesting swarm, as it has now been ongoing for over six months. I'll keep hovering over USGS for updates, but it seems they're sort of 'meh' about this swarm.


*****UPDATE 4/29/15*****
It has been several days since any meaningful quake activity has occurred in the region. It's impossible to know whether or not the swarm will continue at this point, but it seems a bit likely that it is at least dying down.


As of a few days ago, there as been little to no further quake activity in the area. At this time I think it's safe to assume that this very long lived quake swarm is over and is probably going to be quiet for a while. There is always a possibility of a few small quakes happening in the area for a while, but the sequence does at this time appear to be over. If USGS publishes a comprehensive report, I'll post it in another update or in the comments section.


*****UPDATE 7.16.2015*****
And the swarm returns. Largest in current series is magnitude 4.6 at 10km+ depth. It looks like this area will remain seismically unstable for quite a while. This swarm has now endured for nearly 1 year! There is still no definitive study done by USGS (probably due to budgetary concerns), so I can't really speculate on this at this time. Again, yes, the area has very old volcanism, and could be near to some very ancient (65,000,000 years plus) volcanic systems. However there is still no hard evidence that this is volcanic in nature. Some theories are now pointing to (and I'm not sure I agree but I'll throw it out there) pressure from the subducting Juan de Fuca plate along the Cascadia seismic zone. This 'could' be possible, however there is insufficient data to confirm this. My thought is that there is a nexus of seismic pressure causing old rocks to break. Swarms that go on for a year - if volcanic in nature - would typically have resulted in quakes getting shallower and shallower, not deeper. These have gone deeper and kind of hovered at around 10km, which suggests tectonic activity - but again, nothing has been *confirmed* without a doubt... Still keeping my eyes on it!