Yellowstone Caldera was struck by a magnitude 4.8 quake on March 31st, the largest quake in the area in over 34 years. The quake was centered in an area of continuing uplift that has been documented since the mind-90's, and is most likely related to a small intrusion of magma at depth. This quake does not increase the risk of an eruption at Yellowstone, although the volcano is still very closely monitored as its potential for a nation-killing eruption is very high.

It has been a busy couple of years for Yellowstone. Earlier last year, a geyser that had not erupted in over 8 years had some activity, and earthquake swarms have been slightly more numerous than 'normal'. Again, there is no indication that any of this activity is pointing to an imminent eruption. The current episode of D/I (deflation/inflation) is still well within historical norms since monitoring began, and is not out of character for the volcano. While rare, Yellowstone has produced quakes in the larger magnitudes, around 6.0, in the past. 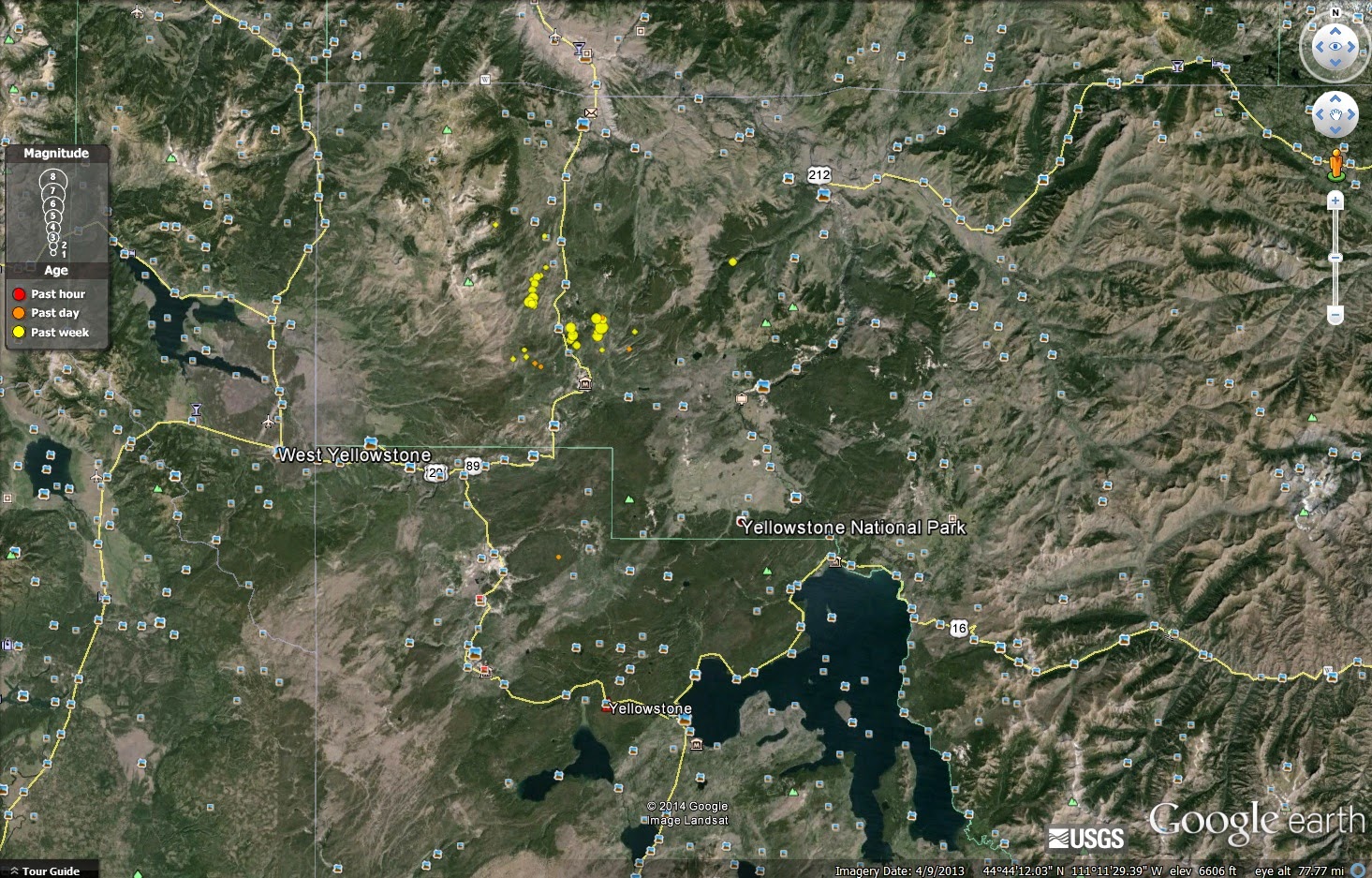 
Yellowstone caldera is one of the most researched volcanoes on the planet. It is used as a laboratory of sorts for all kinds of scientific analysis and testing of technology from seismic wave detection, to imaging of magma chambers. It was recently discovered that Yellowstone's magma chamber is 2.5 times larger than previously thought, however other studies have now suggested that the volcano may be 'dying' as not only is the magma slowly cooling, but the last 'super eruption' of the volcano was more than 600,000 years ago, and its most recent was barely a 'blip' on the radar, some 70,000 years ago.

Currently Yellowstone is classified as active, and has the largest concentration of geysers and hot springs in the world. There is some debate within the scientific community as to whether it is 'overdue' for an eruption, but the recent discovery that it may be cooling might throw some cold water on that idea. It would take a very large injection of fresh magma from the mantle plume to actually initiate an eruption, and this seems quite unlikely at this time. Hotspots do not live forever, as has been seen with ones like the Bermuda Hotspot, which stopped at (you guessed it) the Bermuda islands (or so it has been theorized). It could be that Yellowstone is in it's long, drawn-out death throes, but will still give us a jolt every now and again. Only time will tell, and most likely, none of us will be around when we finally get that answer.

A shallow Mag 5.1 Quake has struck Los Angeles. Many aftershocks are being recorded. This is along a split off of the San Andreas, but is not the San Andreas fault. I will update this blog as news develops.

"The U.S. Geological Survey said the quake struck at about 9:09 p.m. and was centered near Brea in Orange County — about 20 miles southeast of downtown Los Angeles. It was felt as far south as San Diego and as far north as Ventura County, according to citizen responses collected online by the USGS.

Broken glass, gas leaks, a water main break and a rockslide were reported near the epicenter, according to Twitter updates from local authorities." 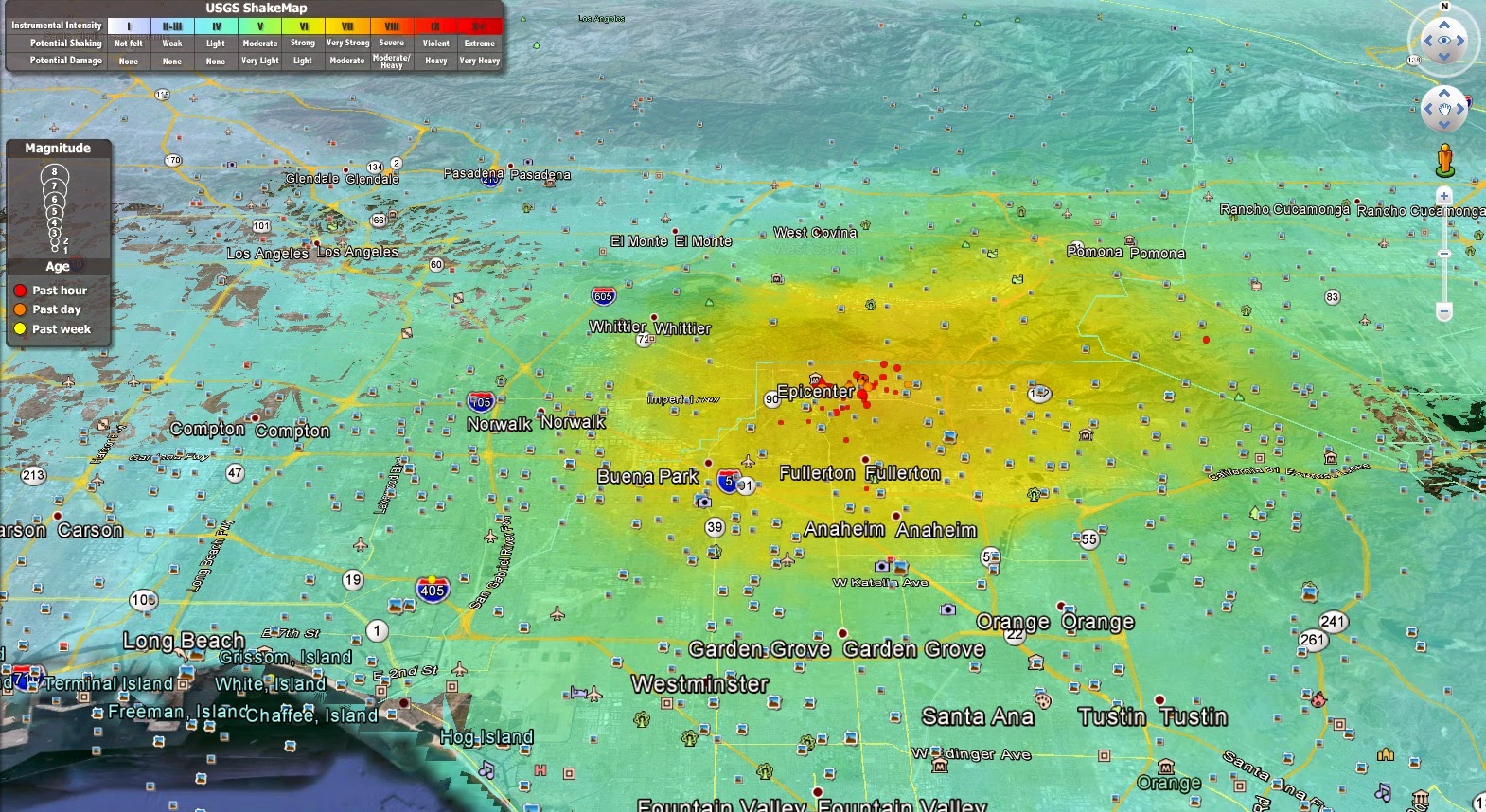 Screenshots from Google Earth with USGS shakemap overlay. Not the color scale and shake strength.

Some residents have reported major shaking, and some minor damage, mostly form objects falling off of shelves. Some infrastructure damage was reported, and more damage will likely be reported later as it becomes apparent. The quake was felt by guests at Disneyland who were riding rollercoasters. Park operations were not affected.

California is well-prepared for earthquakes, however some older structures are still vulnerable. Many buildings have suffered minor structural damage. Emergency personnel are responding.

The main quake was preceded by other smaller quakes, and more, and perhaps even larger quakes are possible. Residents should remain vigilant and prepared for this event for the next several days. Los Angeles has many fault lines that cris-cross through the city, many are still being discovered that have not activated in historical or colonial time (according to records).

In my home in San Diego, we did not feel any shaking.

California's last major quake near an urban center was the 7.2 magnitude quake centered near Mexicali, which was felt as far away as the upper midwest. The current quake series did not occur along this fault.
Posted by Matt at 10:20 PM No comments:

While Iceland has enjoyed a couple years now of near silence from its restive volcanoes, that may soon come to an end with the awakening of it's most active and dangerous volcano, Hekla. While there is no indication seismically that the volcano is due for imminent eruption, scientists say that the magma chamber is full, and primed for eruption at any time. Hekla volcano is not known to give much advanced warning when it erupts, like some of its neighbors. Indeed, most eruptions from Hekla have been quite sudden when it decides to blow. Its last eruption occurred a mere 79 minutes after initial quake activity.

The magma chamber is now more inflated than its last eruptions in 1991, and 2000, which means if it erupts soon, the eruption will likely be larger than recent ones. Given that the volcano doesn't give a lot of notice, geologists advise against any trips to hike around on Hekla. You simply wouldn't have enough time to get away from the mountain should an eruption start.

The 2000 eruption of Hekla was well-documented and monitored. Ash plumes rising up to 11km were produced. Unlike the 2010 eruption of Eyjafjallajökull, this eruption did not cause aircraft delays on such a massive scale, however local ash fall did affect Icelanders.

If Hekla erupted today, it is anyone's guess as to where the ash will fall, and for how long. If the magma chamber is indeed primed beyond the levels of the last two eruptions, we could be in for quite a show. Hekla does have some decent webcams aimed at the mountain, so those that can't make the trip can still check it out once it happens.

Amazing video surfaced today of a drone flying into an active volcano, Yasur in Vanuatu, and really, it's one of the most unique and awesome angles of an eruption I've personally seen. While helicopters can get 'reasonably' close, this drone flew into areas of the eruption no manned aircraft would dare to. Check it out!


Drones have been playing an increasingly important role, not only as tools of warfare, but as scientific instruments, discovering long lost ruins, assisting in rescue operations, and of course, just for fun.
Posted by Matt at 5:10 PM No comments:

It was bound to happen, after years of silence from this fault, but a 6.9 earthquake struck the south end of the Cascadia fault, generating a powerful 6.9 magnitude earthquake, the largest earthquake to strike California since the 2010 Easter quake measuring magnitude 7.2. The quake struck at an approximate depth of 16km, off the coast of northern California. No tsunami was generated.

Residents reported that the quake went for a very long time, and was more of a gentle rocking than a violent shake.

The Cascadia fault is a slip/strike fault, combined with a subduction zone off of California and Oregon. This particular quake struck near the South end of the fault, next to a slip/strike, and subduction zone. While this will probably not result in upsetting any volcanoes in the vicinity, such as Lassen or Shasta (to the E and NE respectively), this could result in tension building up in the northern parts of the plate. This is the largest quake from the Cascadia fault in some time, and by many accounts, could be a precursor towards a larger quake in the future. Quakes as large as magnitude 8.8 have been proven to have occurred through mud cores taken offshore by research vessels, and it is known to have generated tsunamis which devastated Japan hundreds and thousands of years ago.

It is likely that it will still take a few decades for a quake of that magnitude to occur, but time will tell. If I were Oregon, I might take a few looks at the earthquake readiness of the state, and update policy and gird structures as necessary, for it is only a matter of time.
Posted by Matt at 8:25 AM No comments: