Japan's Mt Fuji May Be Preparing To Erupt

Volcano-Report.com is reporting that Japan's Mount Fuji (Fujiyama) volcano is showing signs that it is getting ready to erupt. While translating Japanese to English using Google translate leaves much to be desired in terms of readability, the news story (in Japanese) appears to be saying that fumerolic activity and steam emissions have increased, with an unclear anecdote about a 50m wide "new" crater. The only picture I was able to find (below) was a bit grainy, and appears to be showing a snow-less crater on a very snowy mountain. I cannot personally confirm whether or not this is actually a picture of Fuji as there are no other identifiable landmarks in the photo. 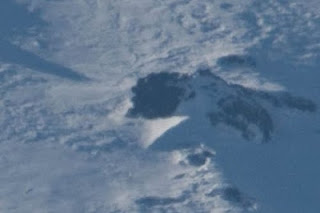 Image from Japanese media of a supposed "new" crater on Mt. Fuji (Fujiyama)

Following the Japanese 9.0 megaquake, there was a magnitude 6.4 quake slightly West of Fuji at it's base. Other quakes of smaller magnitudes (4.0-5.5) have also struck within 50km of Fuji.

While it is unclear from the photos if this is truly a new flank eruption of Fuji (I imagine if the weather was cloudy that people might not notice, but the volcano is easily seen from a great many cities in Japan from a great many angles), the photo does not seem to have an ash layer over the snow. The recent eruption of Mt Etna in Sicily occurred in a supposedly similar fashion, with a cone building flank eruption producing lava flows on a snowy landscape. The ash was clearly visible on the snow for many days.

Mount Fuji last erupted in 1707, in what is considered its largest historical eruption. This eruption was characterized by a massive flank explosion that left a very large crater on the East side of the mountain. This eruption devastated villages nearby, and was strong enough to cover Tokyo with ash. Many current communities in the area are actually built on thick historical lava flows from this event. Nobody alive has ever seen Fuji erupt, but they all know the stories from well-kept records of that period, and the last eruption was very well documented in Japanese historical archives.

Over 100 cinder cones and vents dot the landscape around Fujiyama, highlighting the unpredictable nature of eruptions from this volcano. Fuji could start out with a cone building phase, and enter into a more explosive phase, or this could be all that happens at Fuji for the next hundred years.

If any new information comes available, I will update this blog immediately.