According to an article on The Asahi Shimbun, Hakoneyama (Hakone) Volcano in Japan has been put on alert, and visitors restricted from visiting the summit. Hakoneyama is the close neighbor to Mt. Fuji, which has according to experts been in a state of high pressure for some time now.

Hakoneyama has not erupted for some 2900 years, although the numerous hot springs, geysers, and fumeroles within the caldera point to an active magma system. Recent seismicity has given reason for the high alert status. According to the article, many shallow quakes have been recorded in the last month, with 16 quakes recorded on April 26th, and 72 from May 2-4. 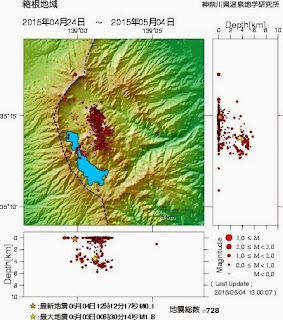 
According to the article, inflation is being recorded at the volcano. While this does not point to an imminent eruption, this volcano was on the same large subduction zone that was affected by the infamous 9.0 quake of 2011, which caused the Fukushima nuclear disaster, a massive tsunami, and associated disasters. Quakes of that magnitude in active volcanic zones can produce some surprises.

Japan is likely more wary of volcanic unrest after Mount Ontake erupted with little warning, killing hikers and tourists, and stranding many in mountainside lodges. It was the worst volcanic disaster for Japan in recent times. The caution can and will save lives should the volcano erupt.

The Smithsonian GVP Characterizes the volcano as such:

"Hakoneyama volcano is truncated by two overlapping calderas, the largest of which is 10 x 11 km wide. The calderas were formed as a result of two major explosive eruptions about 180,000 and 49,000-60,000 years ago. Scenic Lake Ashi lies between the SW caldera wall and a half dozen post-caldera lava domes that were constructed along a SW-NE trend cutting through the center of the calderas. Dome growth occurred progressively to the south, and the largest and youngest of these, Kamiyama, forms the high point of Hakoneyama. The calderas are breached to the east by the Hayakawa canyon. A phreatic explosion about 3000 years ago was followed by collapse of the NW side of Kamiyama, damming the Hayakawa valley and creating Lake Ashi. The latest magmatic eruptive activity about 2900 years ago produced a pyroclastic flow and a lava dome in the explosion crater, although phreatic eruptions took place as recently as the 12-13th centuries CE. Seismic swarms have occurred during the 20th century. Lake Ashi, along with major thermal areas in the caldera, forms a popular resort area SW of Tokyo"

Since this is a breaking news story, and from Japan, it will be difficult to monitor the situation by normal means, but I'll keep an eye out, and should anything develop, I will update this post.

Japan's Meteorologial Agency (JMA) raised the alert level of Hakoneyama to alert level RED. This is more than likely out of an abundance of caution, but after the eruption of Ontake, this is a prudent step. Volcanic tremor remains elevated, and steam vents are becoming more vigorous. If Hakoneyama were to erupt, it would be the first eruption in historical time.

JMA has lowered the alert level for Hakoneyama after visual observations noted a decrease in steaming from the various fumeroles and steam vents, in conjunction with a decrease in seismicity, as well as deflationary tilt. The alert level remains elevated, but no eruption now appears imminent.


*****UPDATE 6/30/2015*****
According to Reuters/Yahoo, Japan's Hakone (hakoneyama) volcano has now had a small ash-emitting eruption, after around a month or so of unrest. Japan had previously restricted access to the steam-vents area near the resort and issued an exclusion zone. The eruption was described as very small. 40 people were evacuated from the summit area. Live cams currently show vigorous steaming, suggesting that this was possibly a small phreatic (steam driven) eruption. New eruptions can happen at any time, and any new steam/hot rock interactions can cause more eruptions. Any fresh injection of magma (which is thought to have occurred) can increase this risk.

The volcano is now at Alert Level 3. A drone flight on June 20 revealed damage to facilities caused by large amounts of sulfur and gases being expelled by the volcano.
Posted by Matt at 10:37 AM No comments:

Two strong phreatic (steam-based) eruptions have occurred at Mt. Bulusan in Luzon, Philippines. It's last known eruption was in 2011. According to Filipino news sources, the first eruption lasted about 10 minutes, followed about 20 minutes later by a shorter eruption. There is currently no danger of magma injection or lava flow from the volcano.

Phreatic eruptions can occur without warning at many active volcanoes, especially 'wet' ones like volcanoes that have crater lakes at their summits, glaciers, or other sources of water. What occurrs is that water seeps into the volcano, making contat with extremely hot rock. This flashes the water into steam, causing a huge pressure buildup and subsequent rock explosion.

The reason there is no further danger of a larger eruption, is that typically phreatic eruptions are not related to new magma being injected. They are only related to surface water seeping into the hot, mostly solid rocks.

PHIVOLCS is updating the situation on Twitter, so you can follow the developments there.
Posted by Matt at 9:28 AM No comments:

According to Volcanodiscovery.com and a few social media outlets, Volcan Guallatiri is experiencing a volcanic quake swarm, prompting SERNAGEOMIN to raise the alert level. According to the Smithsonian GVP, Guallatiri  has not had an eruption since December 2, 1960, and questionable activity was possibly observed in 1985.

So far this activity has not led to an eruption, but as is the case with many Ring of Fire volcanoes, that can change at any moment, and in Chile's case, with or without warning. Chile has seen a string of previously dormant, or long dormant volcanoes activate without warning. The 2008 eruption of Chaiten gave little to no warning. Calbuco volcano was also quiet up until it exploded.

The reason for this is the nature of the lava. Many of Chile's volcanoes are rhyolotic or andesitic, which make for a dense magma with tons of dissolved gases stuck inside waiting to burst, so these stratovolcanoes are particularly nasty when they choose to erupt.

If the volcano does erupt, I will update this post.
Posted by Matt at 7:35 PM No comments: