Katla volcano under the Myrdalsjökull glacier just had a magnitude 4.4 quake with many smaller tremors. This is the strongest quake at Katla in the latest unrest which has seen swarms occurring weekly. Katla is thought to be primed for an eruption at any time. Webcam views of Katla are not clear at this time due to fog, so it's impossible to see what is going on. Since this quake sequence just now occurred, it will take some time for Iceland Meteorological Office to give any statement. 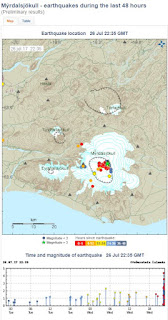 
I will update this post as the sequence continues.

After a 3.0 magnitude quake at Katla, harmonic tremor (read: fluid movement and/or magma) is on the rise. You can track the tremor here: http://hraun.vedur.is/ja/Katla/
Tremor is continuing to rise and so far is not showing signs of stopping. This could very well lead to an eruption within hours (or days). Now is a good time to keep your eye on Katla, you can watch the webcam feed of it here (note, you may need to use an older browser such as Internet Explorer to view the cam feed as newer browsers have ceased to support Flash): http://www.livefromiceland.is/webcams/katla/

A large and somewhat powerful earthquake swarm is currently underway in Iceland's Reykjanes Peninsula in the area of the Krysuvik volcanic center. According to blogger Jon Frimann and the Icelandic Meteorological Office, this swarm is partly tectonic and magmatic in nature. At the time of this writing there have been 9 earthquakes above magnitude 3.0, with one 4.0 tremor so far in the sequence, and dozens of lower magnitude quakes. 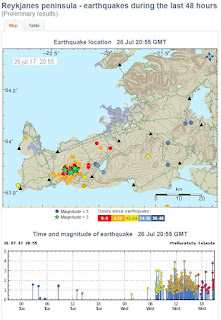 Krysuvik volcano last erupted in 1340 CE, according to the Smithsonian Global Volcanism Program. It is unknown whether or not this could lead to an eruption. Reykjanes volcano however last erupted in 1926 CE, but this was a submarine eruption, not on the main island.

If this does end up as an eruptive event, it could put thousands of Icelanders at risk as the area is close to the towns of Volgar, and Grindavik. Previous eruptions of Krysuvik and Reykjanes have been fissure and flood basalt driven, which would mean that large lava flows and gas release would be the biggest hazards. It is still too early in the sequence to tell if this will end up being just a rumble, or develop into an eruption. 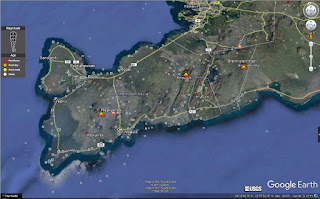 
At current, the Icelandic Meteorological Office has not raised the alert level for the region, which might suggest that they are not anticipating this to develop into an eruption. This could change at any time based on how long this swarm continues for. Since the Krysuvik volcano has not erupted for around 700 years, it is more probable that this swarm is related to the Reykjanes system.

If anything further develops I will update this post. 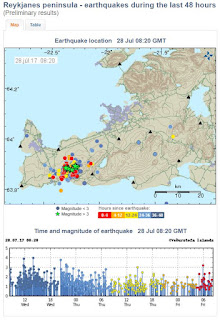 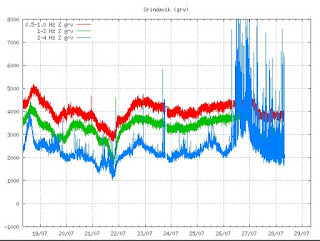