The Iceland MET Office raised the volcanic alert level to Yellow today for one of Iceland's largest and more dangerous volcanoes, and neighbor to nearby Eyjafjallajökull, Katla on Monday. Katla has long been suspected of leading up to an eruption after the 2010 eruption of its neighbor, and after a series of  Mag 4.0 or greater quakes, followed by numerous other quakes over 3.0, it seems that the time may be near for Europe to prepare for another round with Iceland's volcanoes. 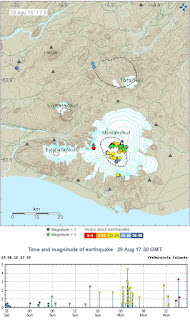 Katla's last confirmed eruption was October 12, 1918, (and it has possibly had some minor subglacial eruptions in later years, though these eruptions are only inferred through glacial floodwater analysis), which means, like Eyja, it has gone quite a long time (from our perspective) without a large eruption.

An eruption from Katla would likely be many times the size of 2010's Eyja eruption, and 2011's Grimsvötn (Grimsfjall) eruption. Both eruptions suspended air traffic across Europe, and the gases emitted caused things like acid rain and crop damage across Europe. Katla is capable of much larger eruptions, up to VEI 5, like its eruption in 1721, according to the Smithsonian GVP. Eyja's 2010 eruption was categorized as a VEI 4 due to the amount of ash and gas emitted in total.

If Katla is preparing for a major episode (emphasis on IF, there is no guarantee this will actually lead to an eruption), it will likely cause similar economic and travel turmoil across Europe, and locally, will likely result in lots of flooding and damage to nearby roads and bridges, which is common in Icelandic eruptions. Local farm communities to the South and South East of Katla would likely bare the brunt of the damage, however they are sparesely populated, and the fact that Katla is a very well monitored volcano should give people time to evacuate should it get ready to erupt.

For you volcanophiles, it may be a good idea to start checking in on the Mila webcams, which can be found here. The 2010 eruption of Eyja, and the recent eruption of Bardarbunga/Holhuraun were live-streamed through this portal, and did not disappoint.

According to Icelend MET Office:

"Glacial water is flowing into Múlakvísl river, south of Mýrdalsjökull. Increased conductivity has been measured in the river and gas measurements in the area show high concentrations of sulfur dioxide and hydrogen sulfide. People are advised not to travel near the river, due to gas pollution. It is not uncommon for glacial water to flow into Múlakvísl, causing increased conductivity and gas pollution.

According to local reports, the level of the Bláfjallakvísl glacial river is unusually high. Bláfjallakvísl originates from the northern side of Mýrdalsjökull and people are advised to show caution when crossing the river."

This could indicate geothermal activity underneath the glacier is now taking place...
Posted by Matt at 10:52 AM No comments: