Katla volcano in Iceland had a swarm of quakes within the caldera region today, with the largest magnitude hovering around 2.5. Quake swarms have been a common occurrence in the volcano since its small, but damaging eruption in 2011 where a glacial outburst flood (jokullhlaup) destroyed some public infrastructure (bridges).

Blogger Jon Frimann, who is typically the best direct source for Icelandic volcanic events, has been monitoring what he considers to be magma dike intrusion beneath Katla since this eruption. Katla volcano was expected to have a large eruption after the eruption of Eyjafjallajökull in 2010, but has since proven that attempting to predict volcanic eruptions of any kind is a foolish endeavor. Many Icelandic scientists have been quoted as saying, "It's not a matter of if, but when". We are on the "when" stage of an eruption for Katla now.

Katla has the potential of generating huge eruptions (of a probable VEI 3) if it was to get a large injection of magma into its chamber. Currently, it appears that if this is indeed magma dike intrusion (which is definitely a strong possibility with this volcano), the intrusion appears to be quite minor. It is probable that any eruption from Katla at this time may be very small, as larger magma intrusions generate much larger quakes.

However, if magma is able to create a solid and consistent channel to the surface, there is the possibility for a stronger eruption. Katla volcano is overlain by the Mýrdalsjökull glacier, many meters thick. So an eruption of Katla would likely be a repeat of the Eyjafjallajökull conditions where hot magma/lava hits glacial ice and creates a large and fine ash cloud. This of course waits to be seen.

Below is the tremor graph for today's quakes, showing both the location and timeline for the quakes. 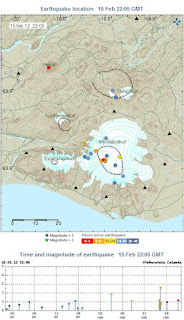 Image copyright Iceland Met Office.
An earthquake swarm also occurred at the Hengill volcanic area, but this is mainly due to geothermal power development in the area. This is quite similar to the seismicity at the Clear Lake volcanic field in California, USA.
Posted by Matt at 2:21 PM