Katla volcano in Iceland has been showing more harmonic tremor pulses as well as minor earthquake swarms within the caldera. This has been typical of Katla for almost a year now ever since it's very minor eruption in mid 2011. Icelandic scientists are quite sure this is minor magma dike intrusion into the caldera system. Katla will erupt in the future, however when is anyone's guess, but it will be sooner rather than later.

The winter in Iceland usually calms geological processes while the ice accumulates, but during spring/summer, the massive amounts of ice start to disappear, making it easier for gases to escape and making the potential for volcanic activity a bit higher. Some scientists believe that melting glaciers on volcanoes can initiate a 'rebound' effect on volcanoes that were covered in ice, resulting in a volcano that is able to erupt more easily. The rebound effect can be seen in the USA's Great Lakes region, an area of former glaciation that is rising geologically very fast (around a couple of cm a year) after the ice sheet retreated following the last ice age. This leads scientists to assume that in Iceland, volcanic activity can actually be affected by the seasons. While this has not been 100% proven and made scientific cannon, it is a compelling theory. Scientists have long theorized that the continent of Greenland might be hiding 'suppressed' volcanoes under the vast plains of ice that make up most of the continent. Again, this has never been proven as the ice is far too thick for a geological readout.

But Katla doesn't seem to mind the ice and snow. Last year it had a minor subglacial eruption (or what is firmly believed to be one) that resulted in glacier outburst floods and damage to a bridge and road. This occurred despite the massive glacier on top, and has erupted before through many meters of ice. I'm not entirely sure Icelandic volcanoes are affected much by being capped with Ice. Grimsvotn volcano doesn't seem to mind the ice either.

The swarm today was particularly strong at Katla, with over 15 quakes within the last 24 hours, all under magnitude 1.5. but clustered very close to each other in the caldera. Check out the swarm below. 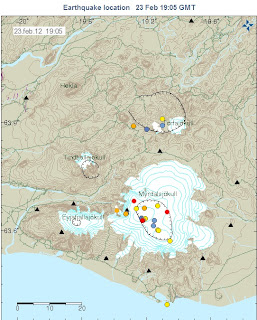